In early December of 2011, I was perusing the online catalog for an upcoming "Interiors" auction of assorted furniture and decorative arts at Christie's in New York City. Two lots being offered in succession intrigued me. They were lots 261 and the next lot. The first comprised a pair of lovely painted and ever so gently worn and charming fauteuils à la reine and the other lot comprised a a canapé en suite. Christie's offered the plausible suggestion that the suite might be by the noted menuiseur active in Lyon during the reign of Louis XV, Nogaret. Examples shown on the Christie's online catalog as presented in December 2011 are seen below. Photos are courtesy of Christie's. 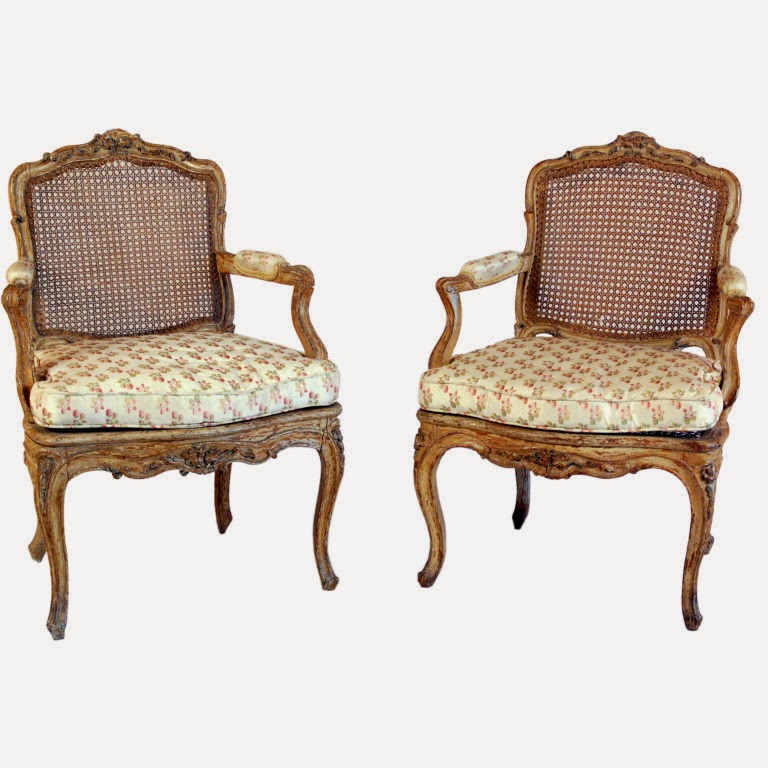 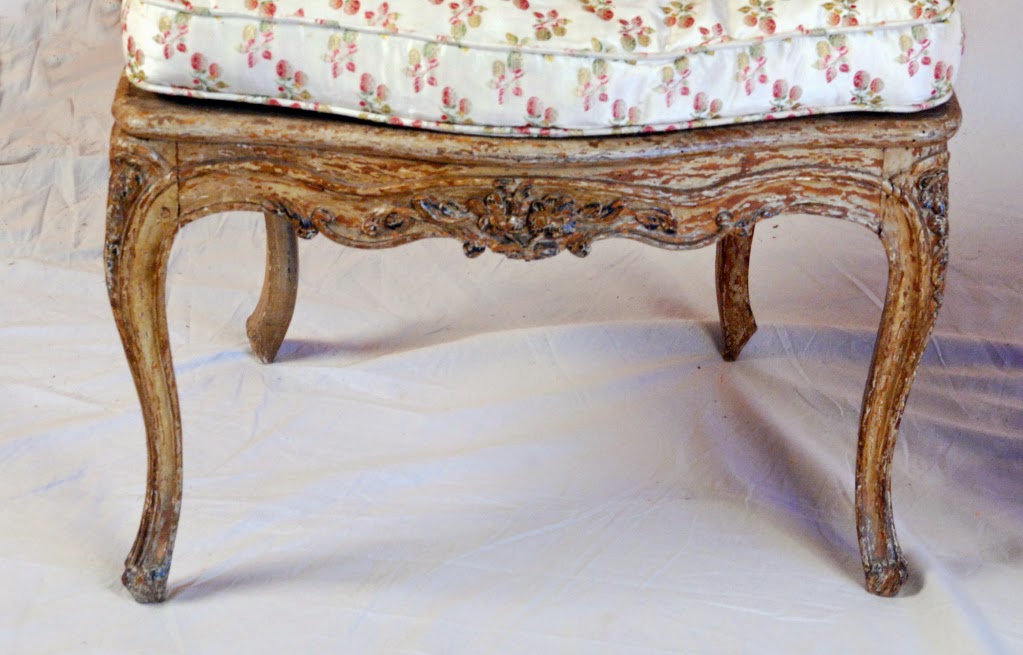 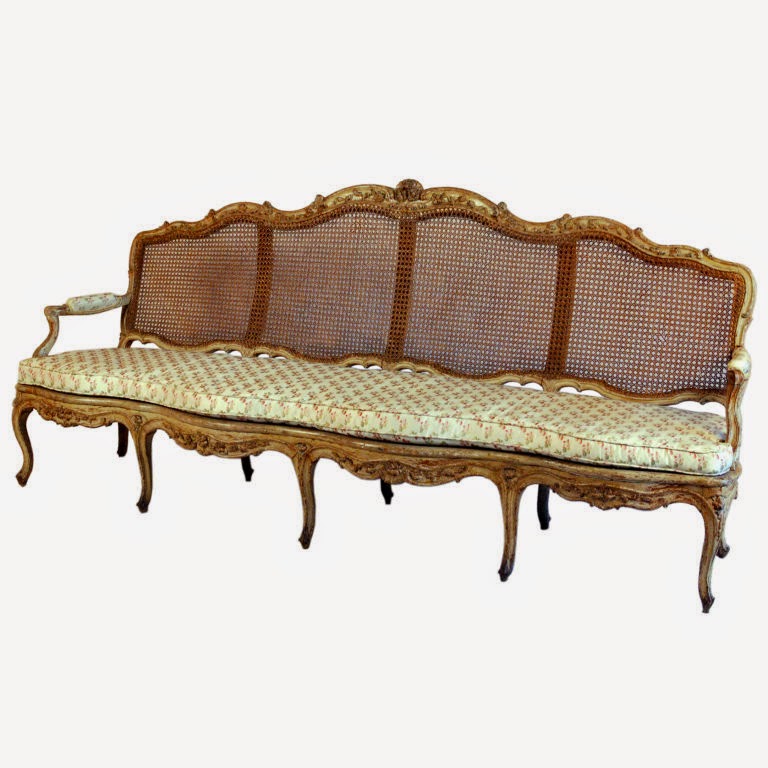 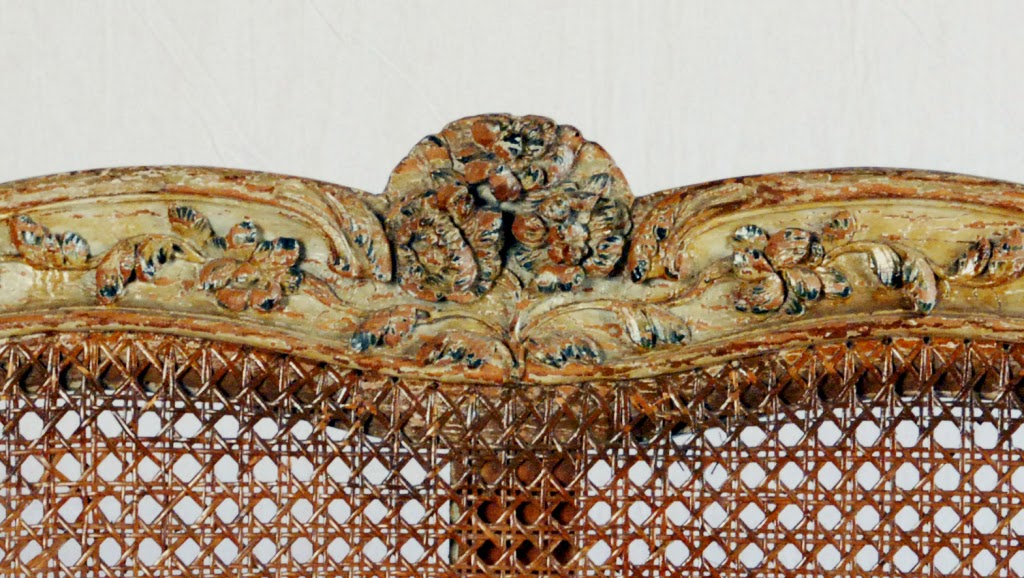 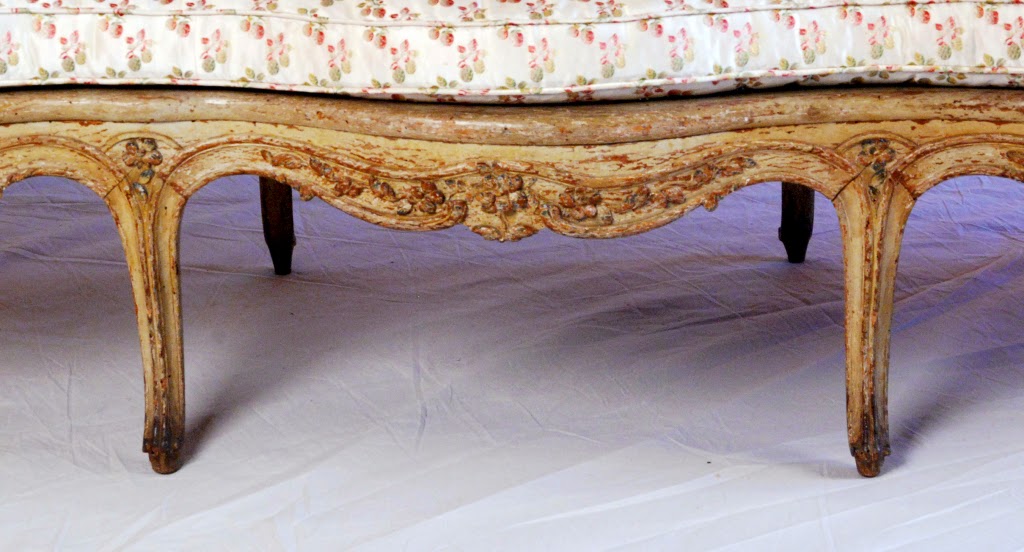 Although I could not fail to notice the similarity of these lovely examples of Mid 18th Century French menuiserie, to some seating furniture in the Rococo "Reception Room" at Vizcaya, a stunning and romantically ravishing house museum in Miami, Florida on Biscayne Bay built during WWI for its owner, industrialist James Deering, I was not prepared for the surprise that these pieces were in fact identical and had once been part of a larger suite of Louis XV seating furniture in that room at Vizcaya before it made the transformation from private house into public museum in the 1950's.  Below are views of the room taken in the 1980's as it appeared with what was left of the furniture after the Deering nieces removed the items which reappeared decades later in the auction market in late 2011. The photos are courtesy of Vizcaya. 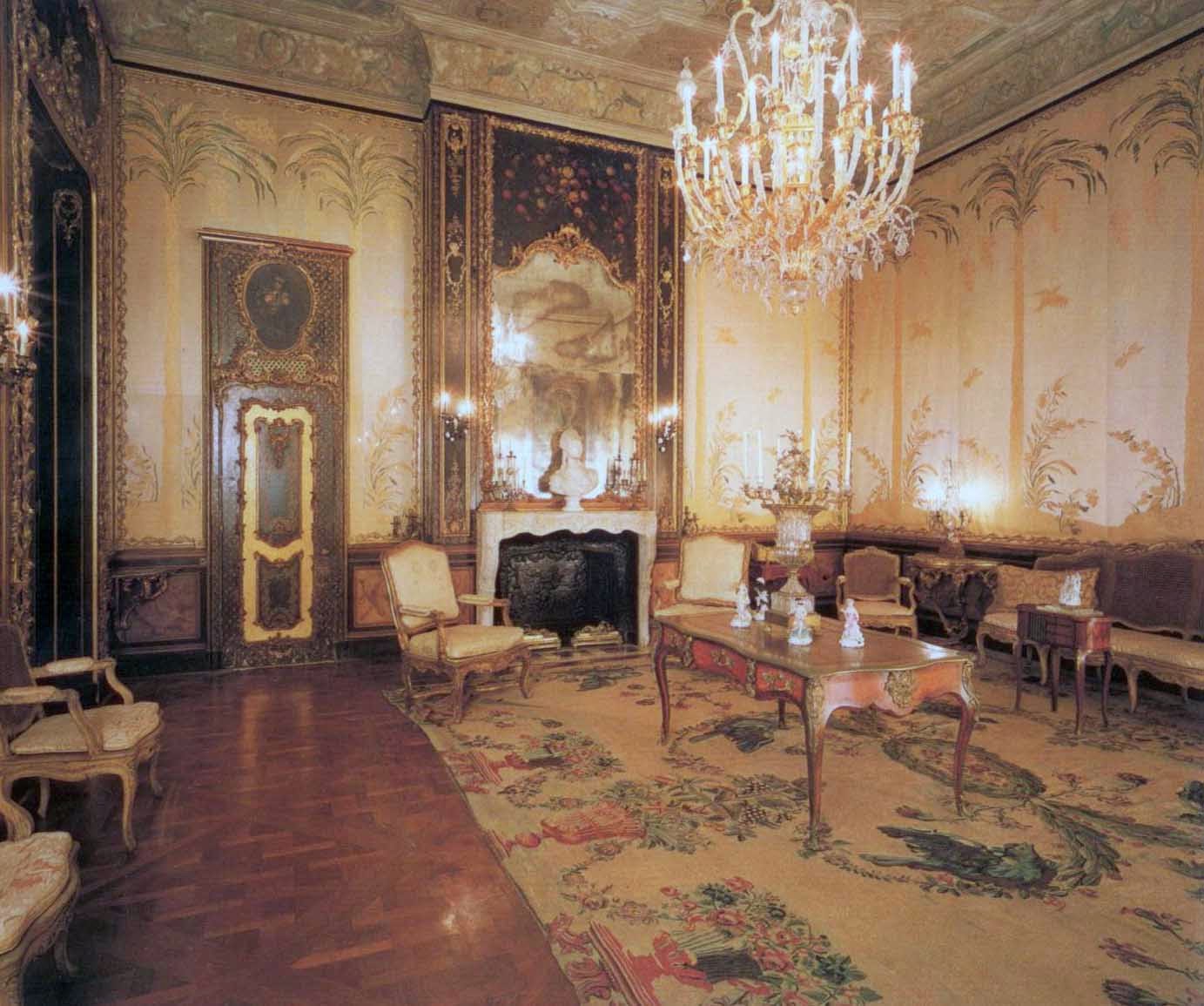 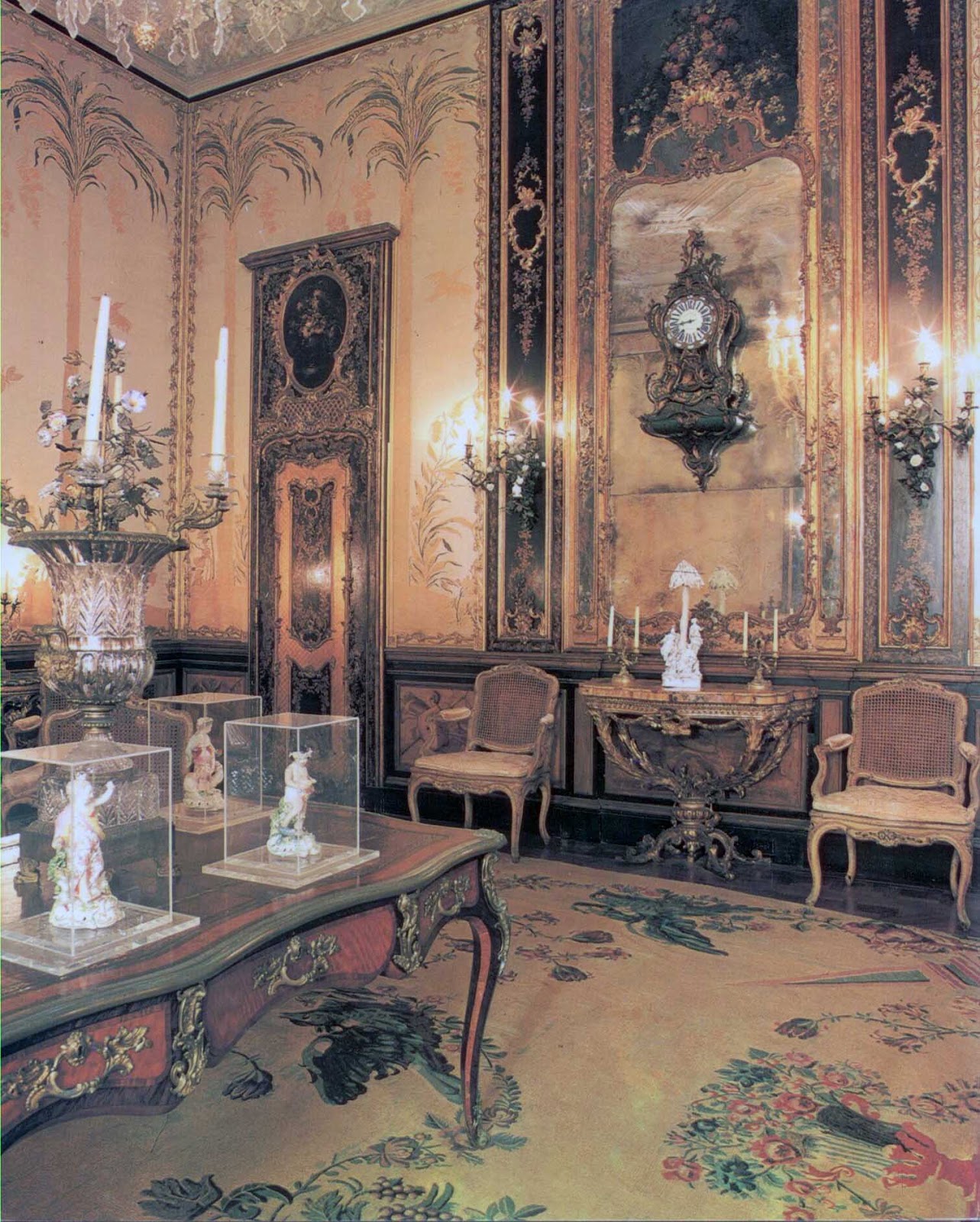 A condition report that was kindly provided by email was the moment when it all came together and it became clear that this offering of 2 fauteuils à la reine that comprised Lot 261 and a canapé which was the next lot up for auction were part of a larger suite of Louis XV period caned seating furniture that was part of the ravishing decorative ensemble of the museum's Rococo "Reception Room".  In this condition report, a very strong provenance demonstrated that two nieces of Vizcaya's owner and builder, James Deering, who were Marion Deering Mc Cormick (Mrs Chauncey) who lived from 1886 and died in 1965, and Barbara Deering Danileson (Mrs Richard) who lived from 1888 to 1987, took possession of the chairs after the death of their uncle. After all, Vizcaya was still a private family owned home and breaking up a large suite of furniture to take back to another residence either niece had up North was not amiss or in any way unusual. it was the prerogative of James Deering's beneficiaries to do as they pleased with the contents of this grand house. The provenance also records that the items were subsequently donated to The Speed Art Museum by these ladies in 1950. Obviously, by 2011, The Speed Art Museum was seeking to sell them in what was likely a sort of de-accession sale and consigned them to Christie's. It was apparent the consigning institution and the auction house had no idea of the historical importance of this set of seating furniture to this widely loved and visited house museum in S Florida.  If any further proof was required, that this set of 2 arm chairs and a canapé were part of THE set in the "Reception Room" , a perusal of original vintage photographs of the interiors in Vizcaya document the prior existence of these very same furnishings when Mr. Deering lived at Vizcaya from 1917 until his death in 1925!  Below you can see a photo of the room as it appeared in 1917 in which the entire suite seating furniture is seen intact. This photo is taken from the December 1917 issue of The Architectural Review, in which the entire issue is dedicated to Vizcaya and penned by its great outrageously talented mastermind, principal decorator and artistic coordinator, the debonair Paul Chalfin. 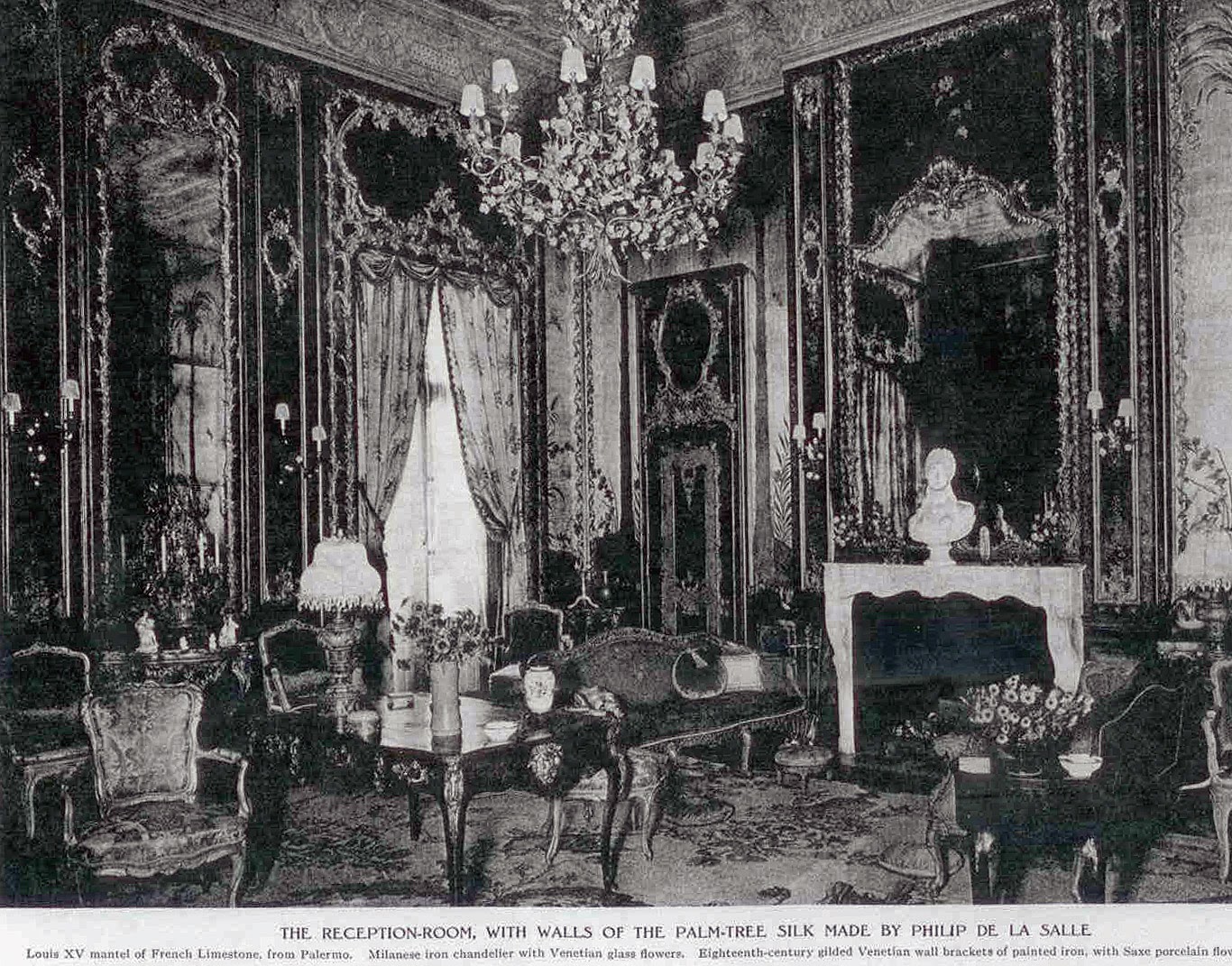 As anyone who has lived a little knows, life is not usually simple or uncomplicated. Getting from point A to point B is not always a straight line.  The harrowing events that followed entailed Vizcaya missing the chance to buy the furniture at auction when the Christie's sale transpired after being alerted on such short notice.  It seemed as if the museum had lost an enviable opportunity. Then suddenly, while perusing 1stdibs.com in the early part of 2012, to my astonishment, the same 3 pieces reappeared on the gallery market in the inventory of Le Trianon Antiques in Sheffield, MA!  This dealer had been the highest (for all one knows perhaps the only) bidder and was now offering them for sale on the retail market. I alerted the museum again. They set in motion the pursuit of the furniture and the curatorial office contacted Le Trianon Antiques immediately. It is to this gallery owner's credit that he was very considerate and reasonable with the museum when approached by the curator of collections employed there at the time in early 2012 (but who is currently no longer at Vizcaya) and agreed to resell it to the museum so the suite could be once again reassembled. Special mention and credit goes to then head of the museum's fund raising arm, "The Vizcayans", Ms. Lynn M. Summers. She was the one to agree with me that the proverbial second chance seldom presents itself, really put the fire under everyone and unrelentingly pushed for this deal happen as soon as she realized the chance to bring this lovely original furniture was there for the taking! Bravo Lynn!

Below are some recent photos that show the current appearance of the "Reception Room" that has regained its "James Deering Era" (1917-1925) appearance again, with its hypnotically enchanting Vernis Martin inspired black and gold wall panels believed to be from an 18th Century palace in Palermo, luxurious wall silks depicting tropical trees after Rococo style originals designed in the 19th Century (which were kindly rewoven free of charge by Scalamandré after it was clear the originals were threadbare about 60 years ago), a rare and delicate Portuguese mid 18th Century needlepoint carpet, a soberly elegant french Louis XV stone mantle piece, various small Louis XV period tables and a Louis XV style bureau plat, original 18th Century Naples and Chelsea porcelains, a Louis XV tôle cartel clock and all of this dizzying array of Rococo beauty under the benignly serene 18th Century Venetian plaster ceiling from the Rossi Palace in Venice! And finally, back after too many years during which they had been long separated, is the now fully reassembled suite of Louis XV period seating furniture. These photos were taken by myself in January 2014.  A truly happy ending!  Go to Vizcaya when you are next in Miami and see this historic house of unimaginable poetry, fantasy and charm and fall in love! 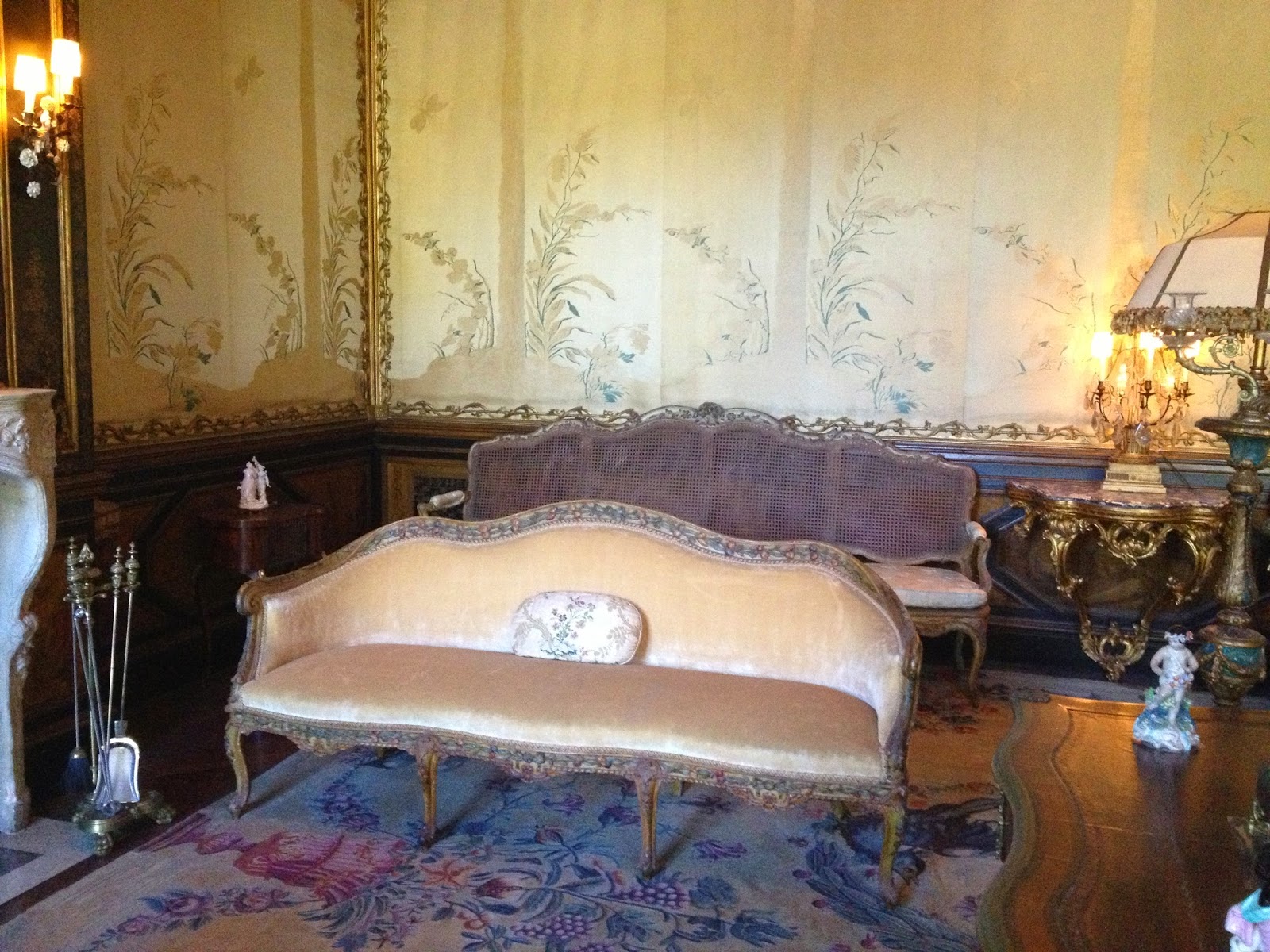 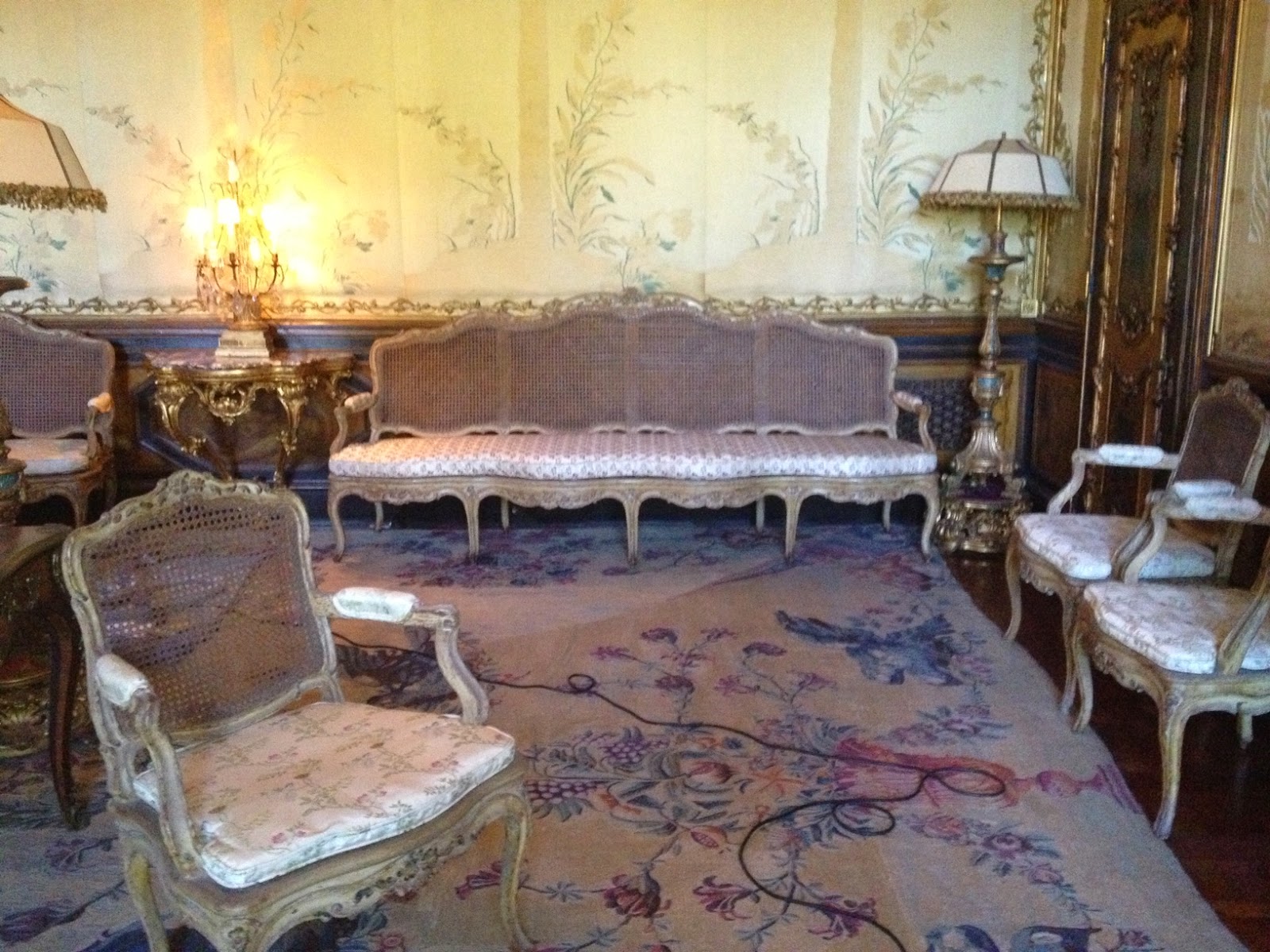 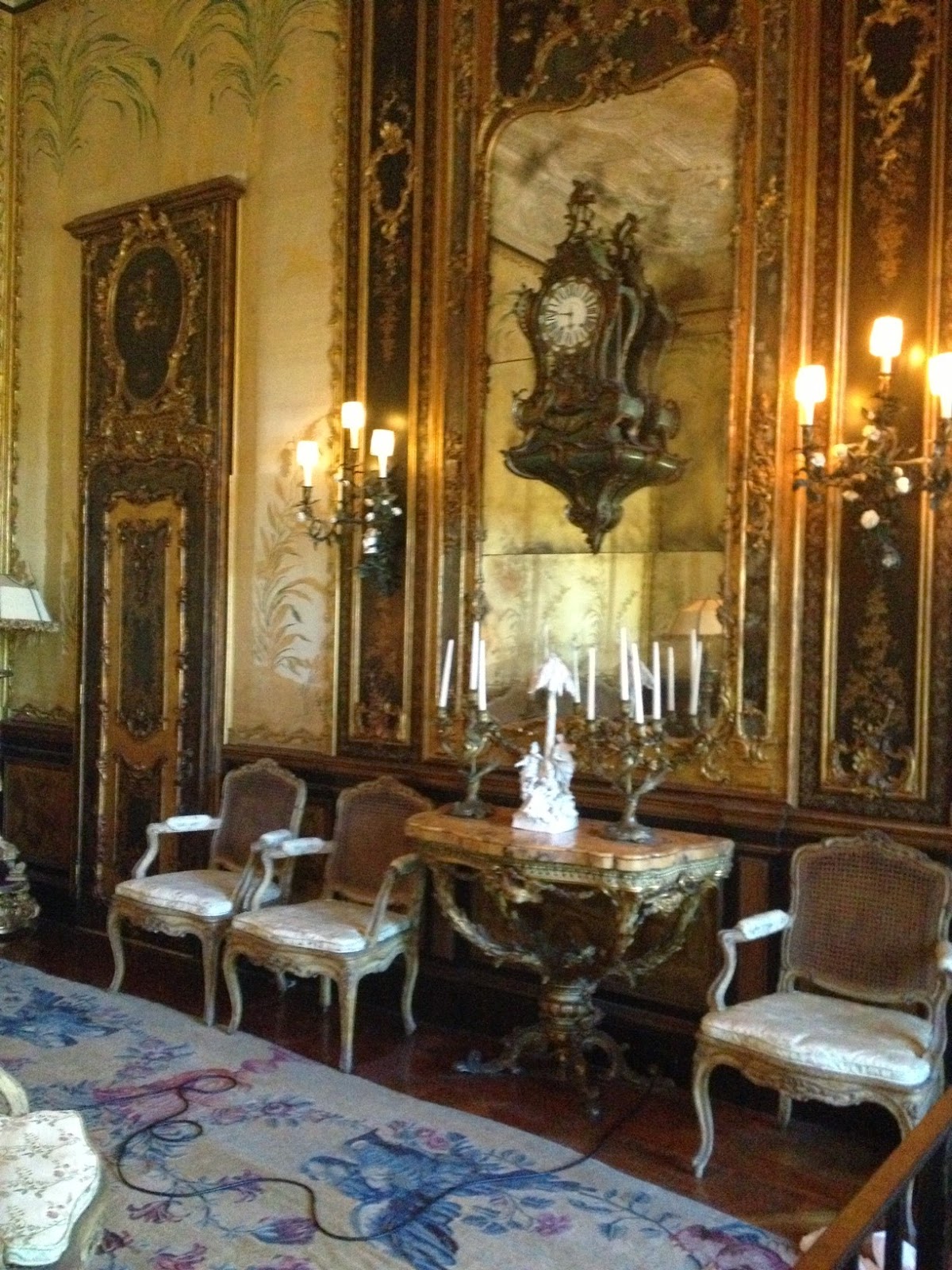 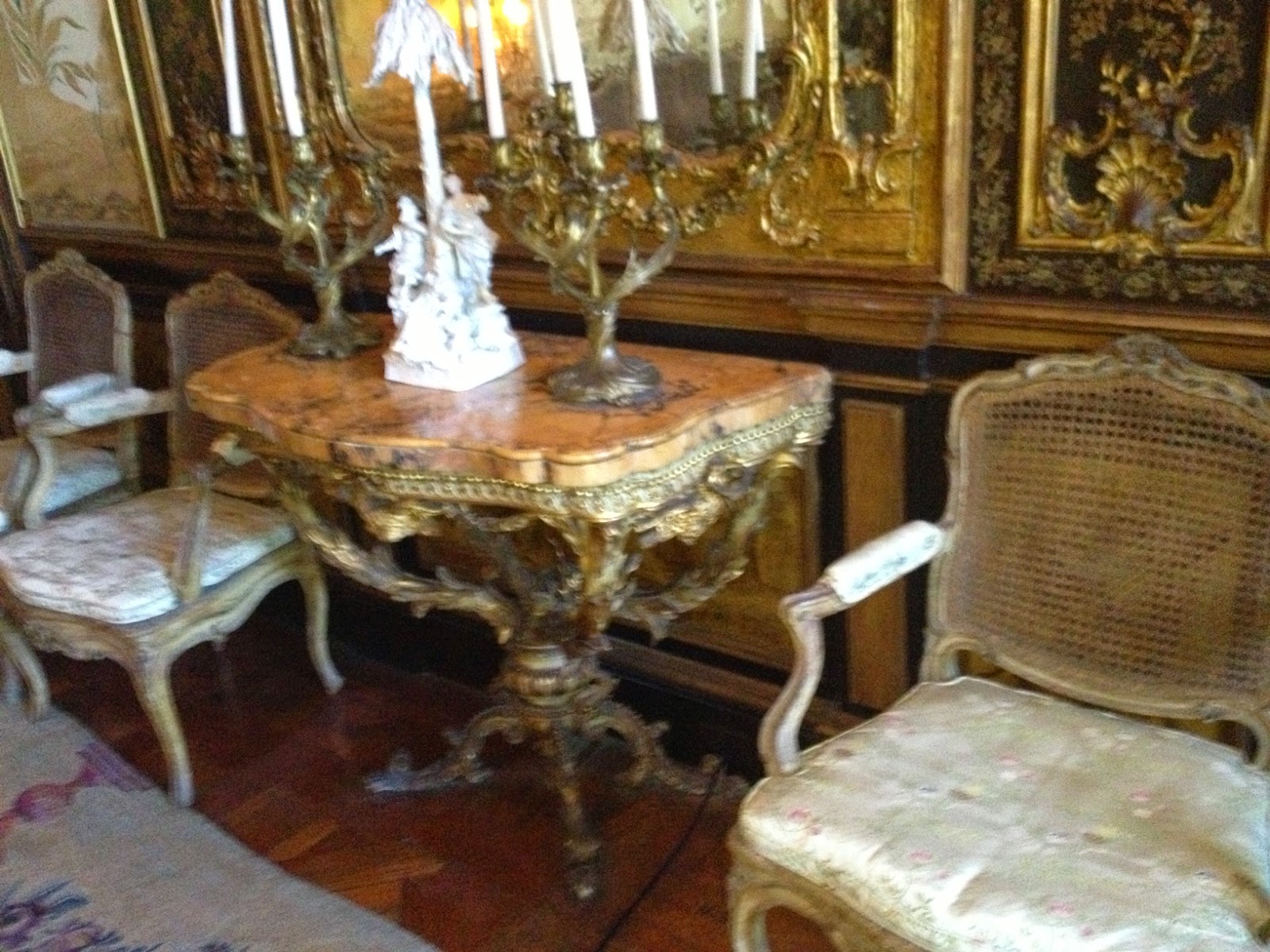 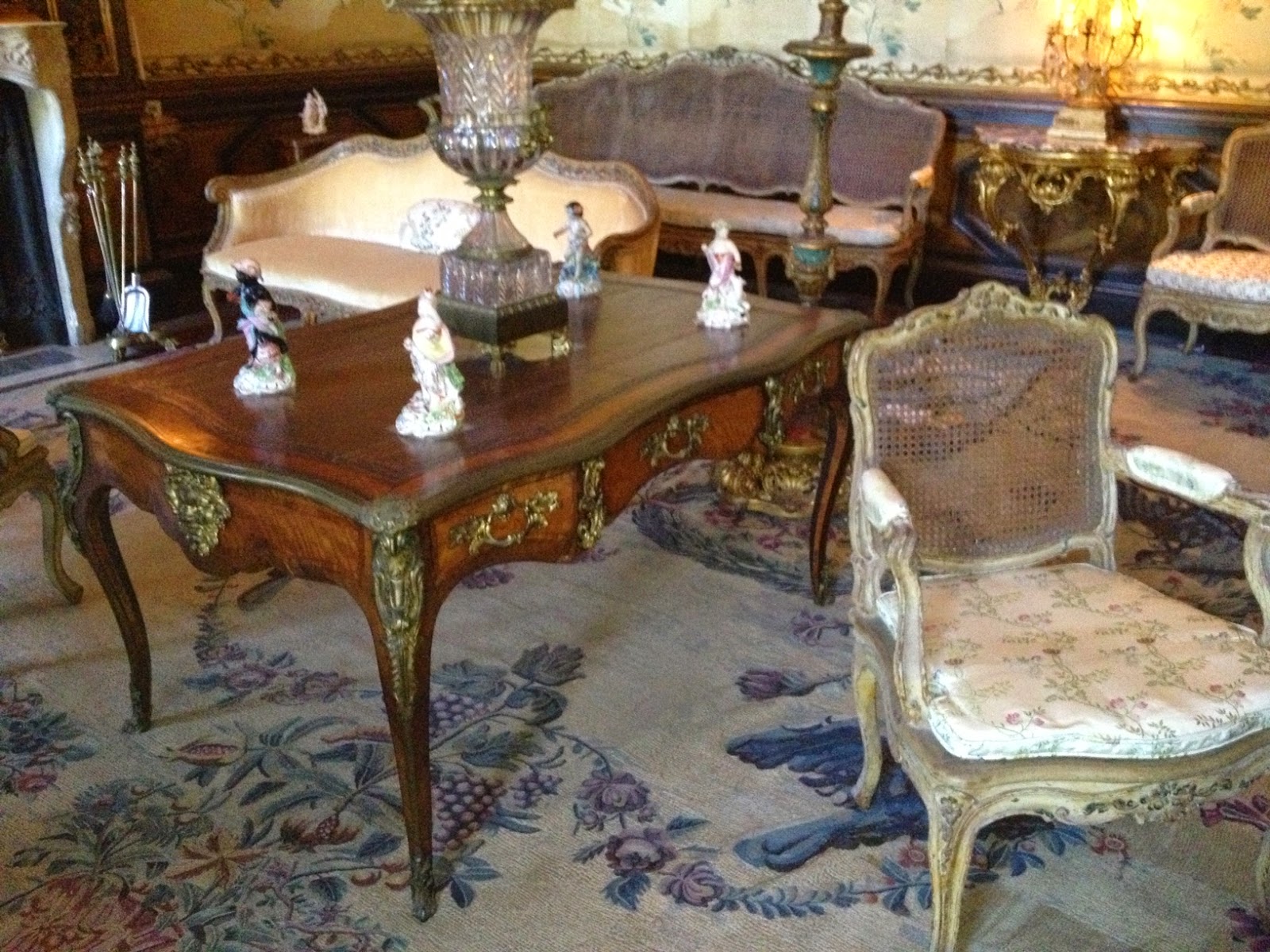 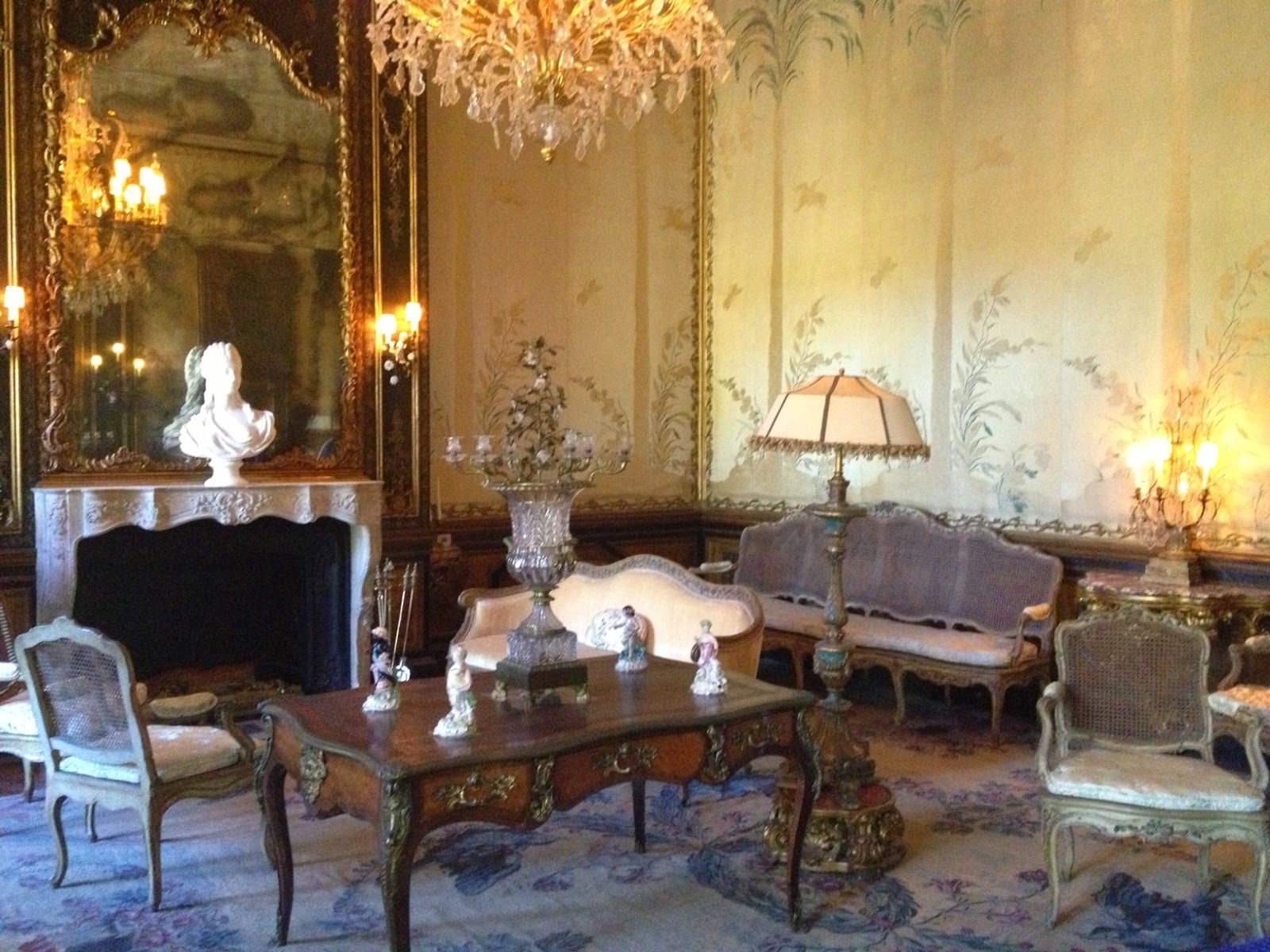 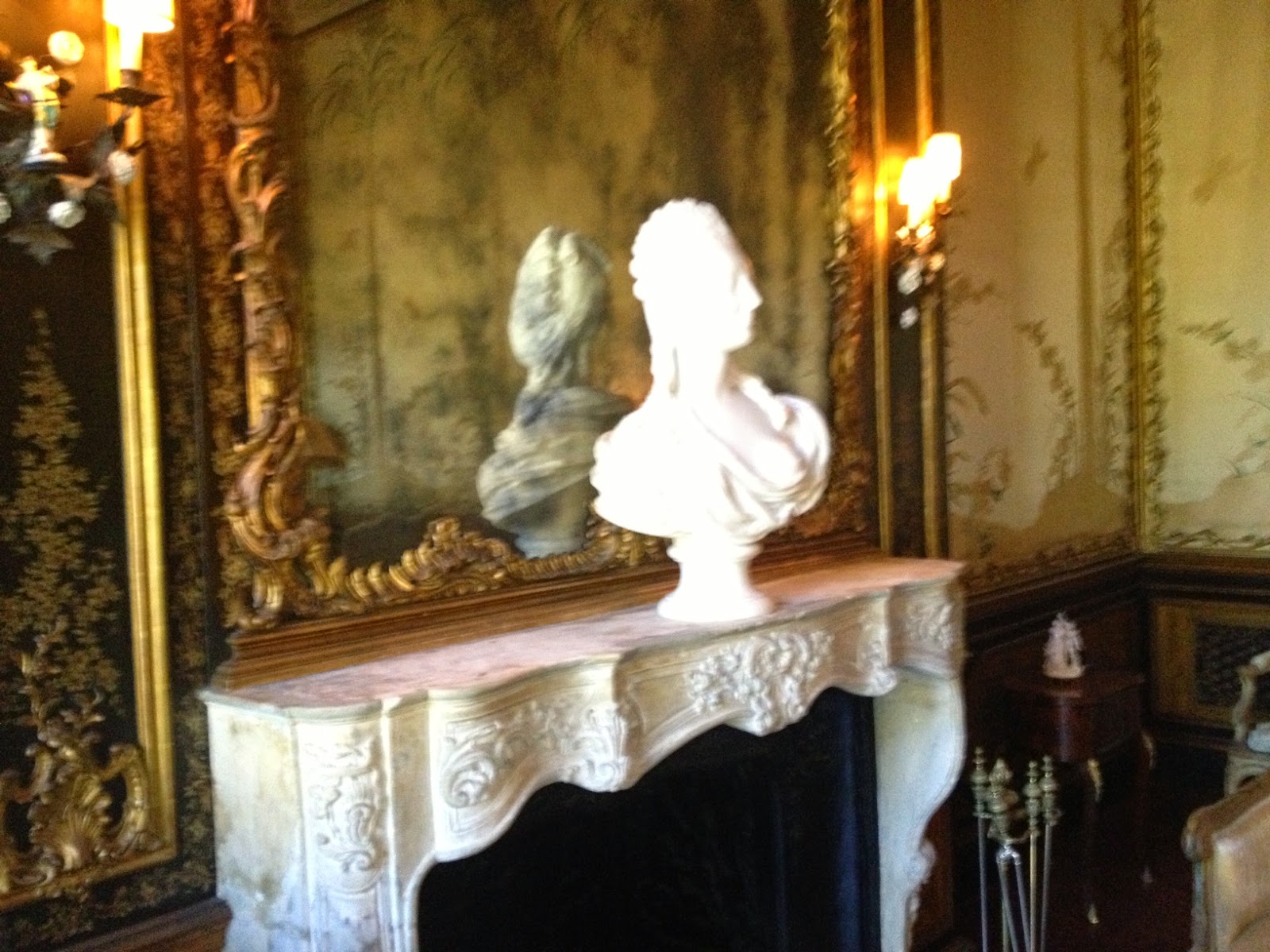 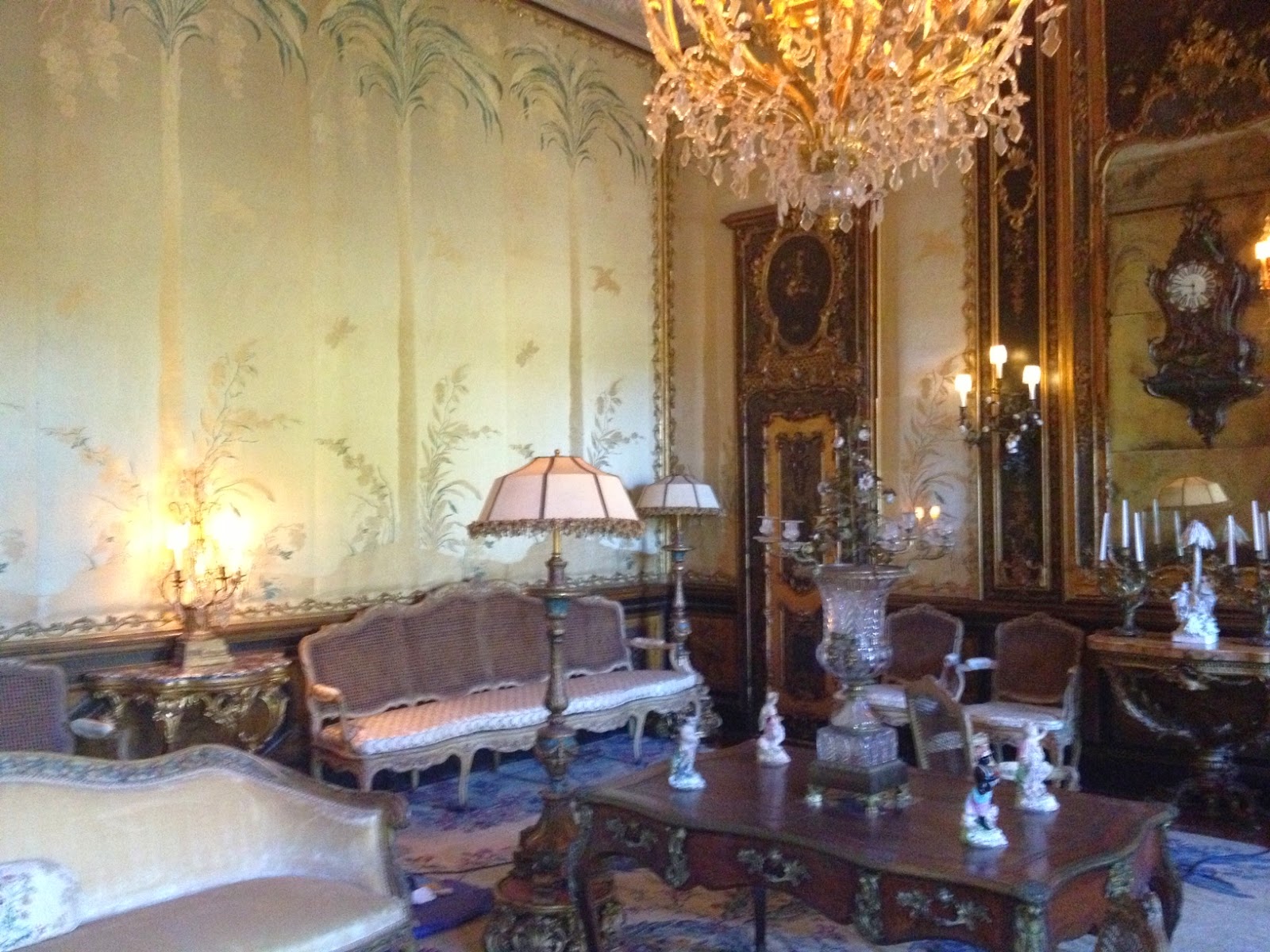 Additional good news about the return of this furniture is that, under the careful supervision of the curatorial staff so ably headed by Gina Wouters, Curator and Remko Jansonius, Deputy Director of Collections and Curatorial Affairs, under the direction of Museum Director Joel M. Hoffmann, Ph D., the suite is scheduled
for a serious restoration and new upholstery for which Tessinari and Chatel silk will be used!

Below are recent photos of the restoration crew carefully working on the chairs in the summer of 2014. 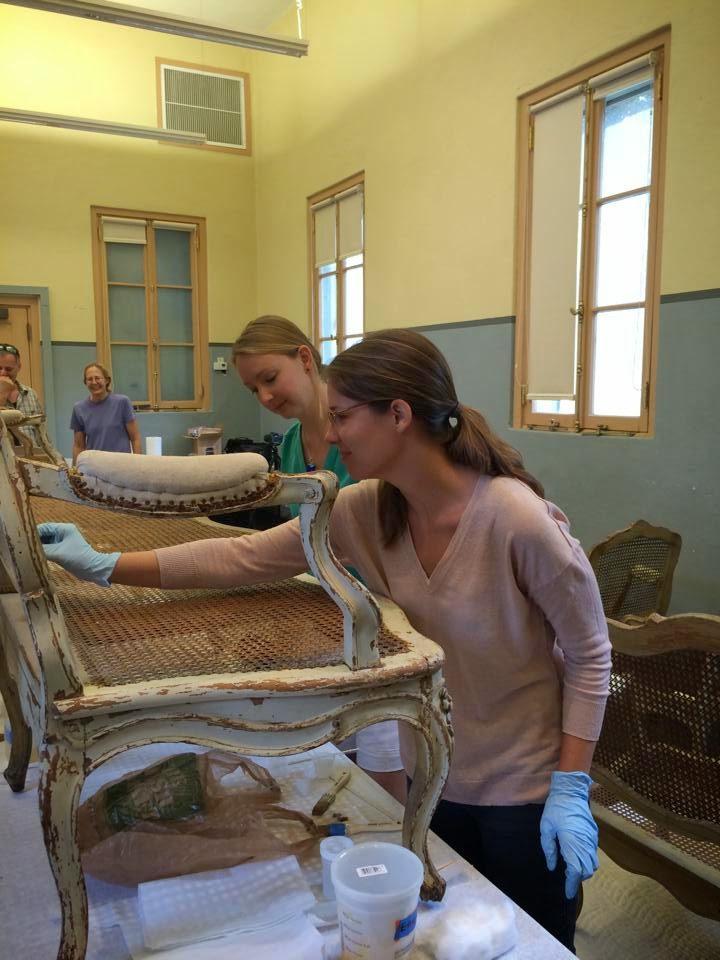 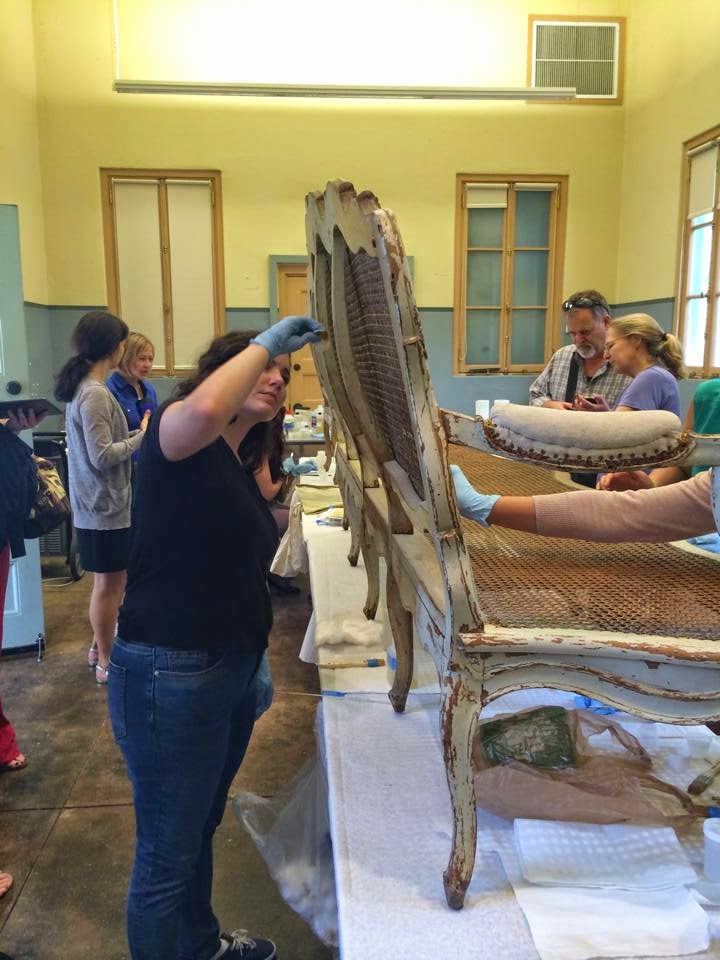 Posted by The Curious Connoisseur at 3:32 AM