Frèdéric de Cabrol was one of the more engaging personages in that delightful social constellation of social figures who animated what has become known as "Cafe Society" which was international but inevitably most at home in Paris from the 1920's until the 1960's.  Married to the delightful Daisy, "Fred", as he was known in society, and his charming wife were a fetching pair to be sure.  She actually lived to a very mature age and died in 2011.  Both husband and wife had unimpeachable and enviable family backgrounds. Frèdéric de Cabrol was a Baron.  Entry into the best circles was never much of a challenge to this very attractive and likeable couple who were part of some of the most memorable social events of their generation. For instance, Fred escorted Diana Cooper to the Beistegui Ball in Venice held at Beistegui's Palazzo Labia in September of 1951. Ambassador Duff Cooper couldn't make it. Fred escorted Diana whose costume (styled by Oliver Messel and Cecil Beaton) was that of Cleopatra as interpreted by Tiepolo, the Venetian 18th Century master whose mural in the grand salon of the Palazzo Labia depicted the banquet of the legendary Egyptian queen.  No surprise. Frèdéric de Cabrol came dressed as Marc Antony!

In spite of the enviable position, neither the Baron or the Baronne were at all wealthy and  Frèdéric de Cabrol had to make his living as a society decorator. This was his drawing room in Paris in 1948 seen below. 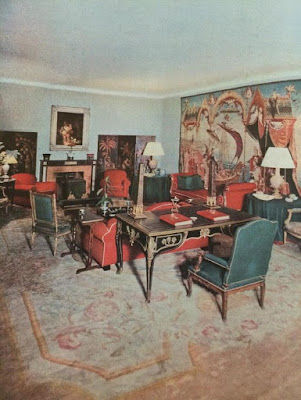 However with time, he upgraded it as rationing of expensive materials such as fabric began to recede as the post war world prospered. And we can see how he covered the walls in unabashedly sumptuous blue velvet which looked ravishing against the Beauvais tapestry of the early 18th Century that served as the focal point of  the drawing room of which we can see two images from an article in Connaissnce des Arts in July 1962. The application of velvet could have been due to the influence of such other decorators of the time of which Georges Geffroy and Emilio Terry come to mind...   A deep appreciation of Pre-revolutionary French 18th Century styles resonates in these rooms which still also seamlessly introduce 20th Century comforts.  Of course the underpinning of Ancien Regime elegance is seldom out of view. The tapestry, the bureau plat and the splendid objects in ormolu resting upon it are the principal objects that lend the room its 18th Century esprit d'epoque with great apparently effortless theatrical flair.. And the splendid tabouret pliant is utterly digne de Versailles!  But the pair of English style cozy club chairs flanking the fireplace also introduce the same comforts as Beistegui introduced in his library at Groussay.    An undeniable tour de force! 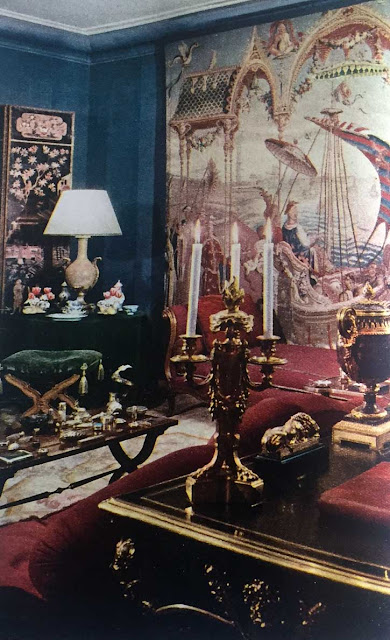 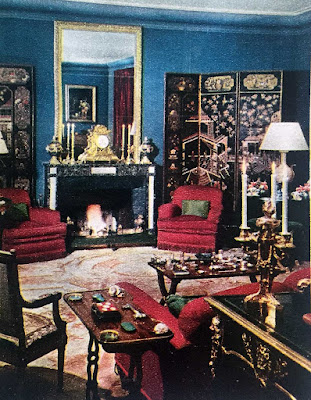 According to Evaline Schumberger, the author of the same Connaissnce des Arts article (who regularly reported on the various works being commissioned by Charles de Beistegui  at Le Chateau de Groussay and at the Palazzo Labia) Frèdéric de Cabrol, who largely drew his clients from his social friends and acquaintances, believed intensely that the designer's obligation was to create a room that genuinely reflected the client's tastes and way of living. Of course it's probably safe to assume his clients were not too different in background and inclinations and style of living and it wasn't as challenging as it might be today in a far more diversified social environment.All the remaining photos below are from that same article in the July 1962 issue of Connaissnce des Arts by Evaline Schlumberger.

Le Baron de Cabrol was also an ardent advocate of three principals: Comfort, Convenience and Warmth.  But like most of le gratin of Paris at the time, he loved the French 18th Century. This dining room he designed in a very refined attenuated Louis XVI style is a symphony of blue in which simple cotton fabric covers the walls and plays off against two tone blue velvet curtains and that hopelessly chic cut velvet upholstery on the chairs which is so evocative of the period. The spare use of a discreet 18th Century portrait of a gentleman flanked by ormolu sconces and a few other spare but delicate framed pictures contribute to create a welcoming and serene environment in which to dine which is animated ever so gently by the blue and white Delft chandelier over the Louis XVI mahogany dining table of sober elegance. 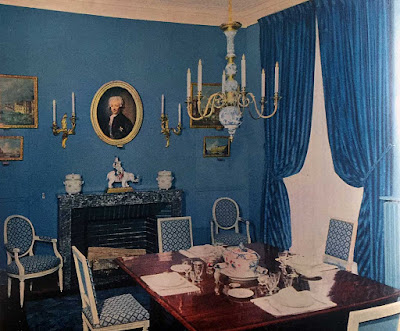 Below is a reminder of what Evaline Schlumberger also reminds us was another penchant of Le Baron de Cabrol: reusing and making creative use of the "nice things" his clients already owned or inherited. He was not one to discourage massive discarding of family items. Of course, one can only imagine the caliber of "things" his clients brought to the project! The drawing room below with its original Louis XIV period marble fireplace and "bones" was a good example of how Le Baron de Cabrol would delight working with the things he clients already owned. The lovely old masters and Regence chairs were other fine heirlooms that come along with the client of which he was no doubt glad to put to use in the project. C'etait magnifique! 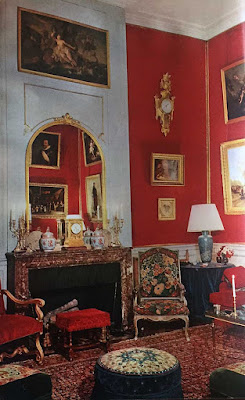 Below is a room in which 18th Century French elements are in evidence... The lovely Louis XVI mahogany writing table in the Reisener tradition in the centre of the room, the Louis XVI green marble mantle piece and white and gold trumeau above it are good 18th Century anchors. But the room in this instance is more of a mid 19th Century mood with the use of golden yellow moire wall coverings and the vibrantly red upholstered Napoleon III style upholstered sofa and easy chairs. It conjures up the kind of room one of Proust's characters such as Orianne de Guermantes would have perhaps enjoyed in private while betraying the influence of Beistegui and Madame Castaing.  When all is said and done, Frèdéric de Cabrol was a master of his art and brought to it the self assurance that only someone steeped in an appreciation of the Ancien Regime and an understanding of its douceur de vivre could bring to the task of the creation of a timeless interior of the sort we'll very likely not see again in our lifetime. 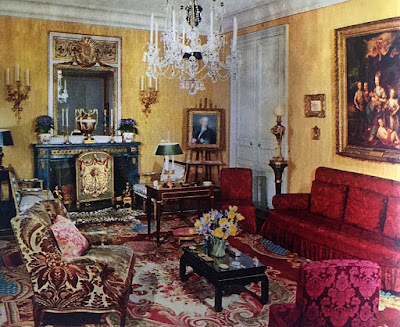 Posted by The Curious Connoisseur at 1:14 PM