Among the last antiques galleries of importance in New York City in the tradition of grands antiquaires that emerged in the 19th Century as the taste for collecting the finest examples of French decorative arts from the Ancien Régime became an admirable pursuit of the emerging North American wealthy elite from the Gilded Age until the end of the last Century when a new generation lamentably turned to a sterile and monotonous craze for 20th Century Modernism and collecting of staggeringly overpriced and dubious "Contemporary Art", Davla Brothers, located in an appropriately seigniorial  19th Century historic town house on East 77th Street, has become a veritable fortress holding out with unrelenting panache and gentlemanly grace at today's ongoing assault on the easy unstudied elegance of Old World Society which repeating  generations of the emerging American rich used to understandably consider something uplifting  to which to aspire until sometime just after the year 2000, when things began to significantly change and turn away from what had once been considered timeless and inspiring.

Happily, the gallery's erudite but approachable owner, Leon Dalva, takes his stand with good humour, wit and has no intention of going the way of so many other galleries which once offered their enviable North American, Latin American, and European clientele the very best examples of French ebenisterie and meneuserie that tended, with few exceptions, to range from the periods of Louis XIV to The First Empire. Below are photos of an evening during which Mr. Dalva, with his characteristic amiability, co-hosted an event at the gallery in 2013 at which I spoke to The American Friends of the Louvre and which was additionally organized by Thierry Millerand and Kip Forbes. Mr. and Mrs. Dalva have long been very active and generous in their efforts to fund raise for this admirable organization that has played a role in supporting the recently newly restored and opened galleries at the Louvre in which the best furniture and decorative arts of the Ancien Régime are currently displayed. 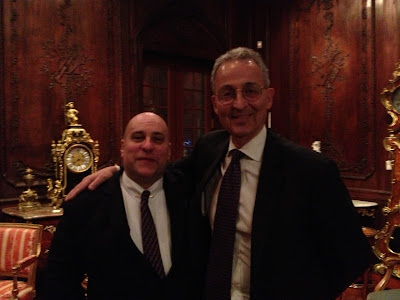 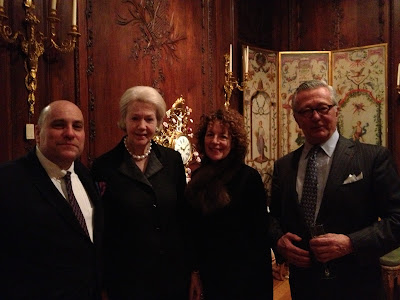 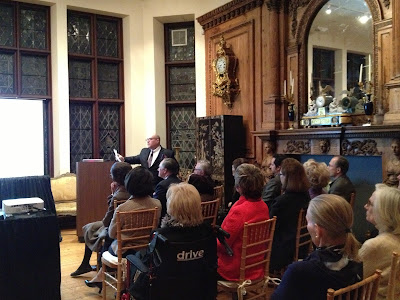 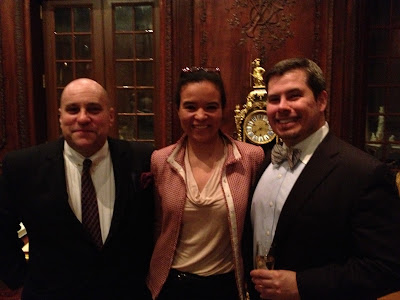 During my last visit in 2014, I was mesmerized by the seemingly effortless ability of Dalva Brothers to continue to maintain an inventory of which not once item would have been out of place in an apartment at The Chateau de Versailles or for that matter at Pavlosk Palace in Russia. Several floors are all set up with period evocations against which Mr. Dalva offers clients the most royal examples of French 17th thru early 19th Century furniture.  In this essay, I'd like to share some of my selections of what I consider to be particularly special and worthy of a glance and some observation from the category of marquetry.

Chronologically, the clock with brazenly polychromatic inlay that I'd like to cite,  is actually Italian from Florence with typical Florentine style inlay that brings to mind the exuberance of the Medici Court and the Medici workshops production of Pietra Dura. But this is marquetry!  Although my focus is French Marquetry, I'm commencing with this example as there is evidence that a very similar clock of Florentine inlay was owned by Louis XIV. After all, he did have Medici blood in his veins and looked to the glory of the Medici for inspiration in his own aspirations for Versailles. As is the instance with the clock once owned by Le Roi Soleil, this one in Dalva Brothers inventory, also has a later inserted French movement. The movement in this clock is signed by Baltasare Martinot, of Paris. It  was placed inside the Florentine body in the early 18th Century. The clock case itself is really a small piece of Florentine Architecture with its form that is essentially indistinguishable from a building's facade.  The walnut case is embellished with ivory, natural and stained bone, ebony, and mother-of-pearl. The "facade" has a pair of free standing columns flanking the dial plate and which are decorated with inlaid floral swags. 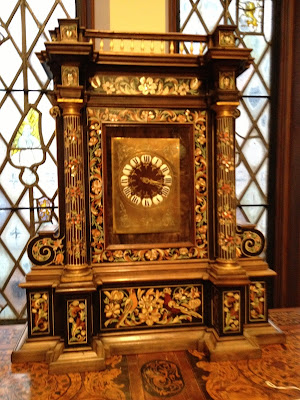 The columns are surmounted by an open pediment with ivory balustrade. 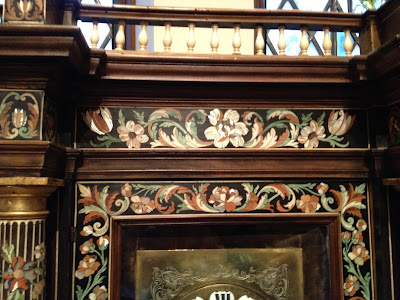 The plinth on the base of support is similarly inlaid with birds and flowers and has a drawer for storage. 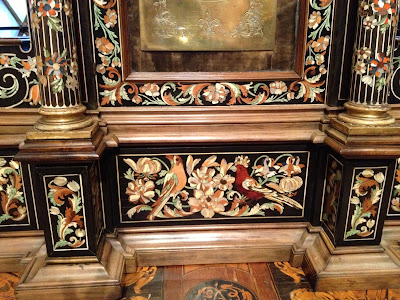 A whimsically inlaid marquetry commode of the more lighthearted Louis XV period owned by Dalva Brothers is this bombé commode bearing the stamps of both M. Hansen and J. B. Saunier. Like many examples of commodes from the mid 18th Century in Paris, it is sans traverse which means that the marquetry  design of the front is uninterrupted and that only a hairline separates the upper from the lower drawer. The exuberance of the marquetry in this example is exceptionally witty and playful! A curvaceous central cartouche is flanked by a pair of kidney shaped fields on the front. The central cartouche has a stylized fleur-de-lis on the top and depicts fanciful birds on branches with leaves and flowers that come together below and are tied by a pretty ribbon.  There are no applied ormolu handles and this was probably the intent of the creator to really allow the eye to focus on the exciting marquetry design. The drawers are opened by the key inserted in the discrete key holes. Though there are lovely ormolu mounts along the front corners comprising finely executed gleaming chutes and sabots.  The marble is apparently of the breche d'alep variety. 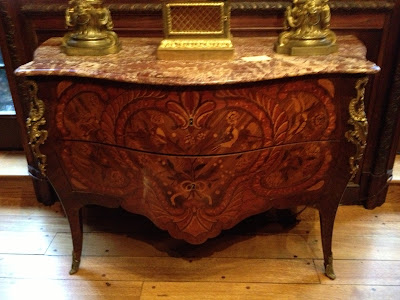 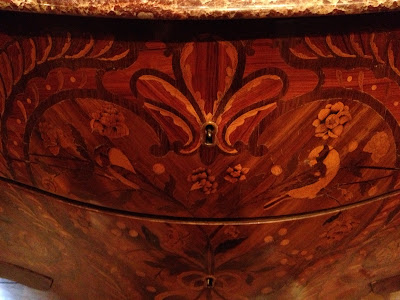 One of the loveliest of the tables boasting bravura marquetry at Dalva Brothers is this one below stamped by Brice Peridez who as not as widely known as many of his contemporaries among today's collectors and became a master in 1738.   It is a three-legged circular table in which the top with its customary reticulated gilded metal gallery is inlaid with marquetry as well and not with the more usually seen marble. The charming sinuous inlaid vines of the frieze drawer are also worth noting. But the table is of particular distinction due to the repeating lower level. Here the creator (perhaps working in concert with a very discerning client having very definite requirements?) placed more than the usual platform and the bottom tier in this table is the same thickness as the upper tier and provides the owner additional storage concealed by more joyful floral marquetry. The top of the lower tier has a pair of hinged doors that open to reveal storage below. 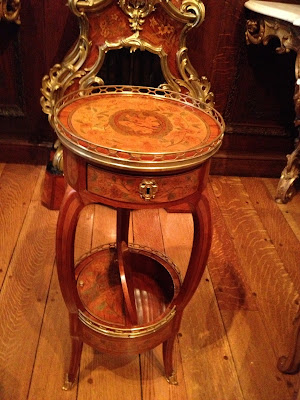 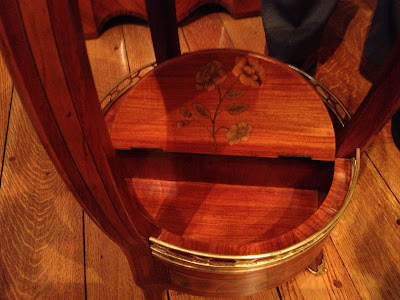 My great favourite in the current inventory of Davla Brothers has to be a significant secretaire `a abattant by the legendary David Roentgen that is almost identical to one this giant among ebenistes also created for an important Russian client in the 18th Century and which is currently in the world renowned Niarchos collection in Paris. The main front panels on this example display what can be asserted to be arguably among this celebrity ebeniste's finest most delicately executed marquetry inlay depicting flowers and exotic birds among trees. The front abattant has veneered panels depicting agricultural tools and flowers suspended from twisting ribbons that bring to mind the bucolic reveries of Marie Antoinette at her Hameau at Petit Trianon. This is Roentgen as good as Roentgen gets in any of the world's best museums! 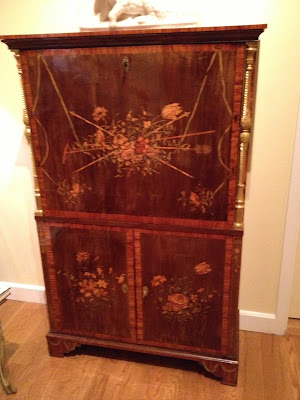 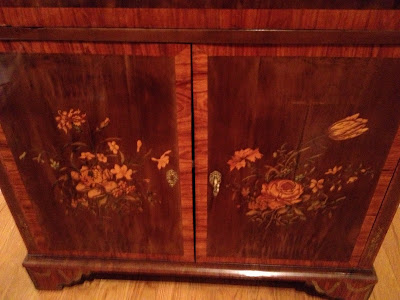 Another secretaire `a abattant in the inventory of Dalva Brothers by less celebrity status ebenistes are also notable. Among them is this chesty marquetry secretaire  in the Gôut Grec style that prevailed in the 1760's stamped by L. Boudin. This splendid example of early French Neoclassical taste as society began to turn away from the riotous curves and counter curves of the Rococo that began to run its inevitable course during the last decade of Louis XV's reign, represents the direction that Madame de Pompadour's taste was taking on the eve of her death at an early age in her 40s' in 1764. 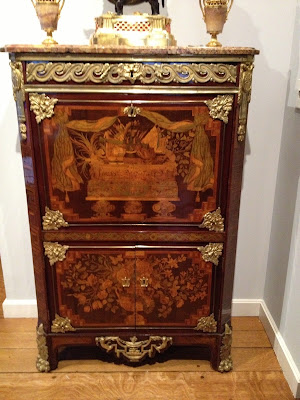 The ormolu band with the rinceau motif over the drop front is particularly assertive, as are all the other ormolu mounts such as the corner mounts incorporating motifs that recall the Baroque vision of the classical world as envisioned during the reign of Louis XIV.... 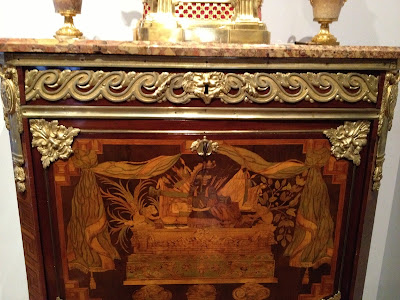 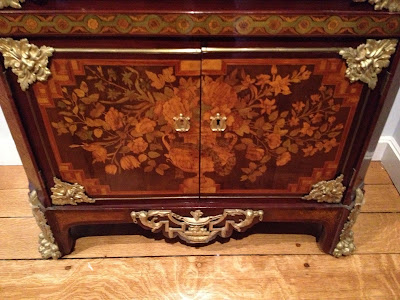 .... While the corner mounts atop that join the upper frieze clearly already look to the Classicism one associates with the 1770's with the imposing laurel leaf swags surrounding the oval medallion. 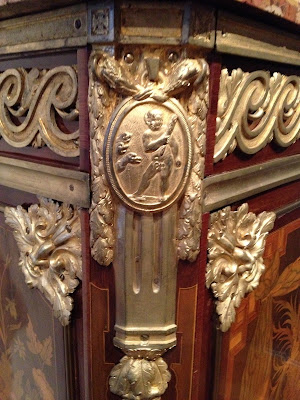 In this time that has witnessed a fundamentally and radically changed climate of collecting and in the very interpretation of domestic life among the sophisticated and the affluent who have historically defined L'Art de Vivre, it's obvious these masterpieces, once coveted by princes and later captains of industry who followed the former's example of unquestioned good taste,  have lamentably waned in their desirability to a newly emerging generation of well to do collector whose lack of interest is entirely due more to a severe and lamentable lack of education and examples from the ranks of elite society  as provided to preceding emerging generations of wealthy new potential patrons and collectors. Today's newly emerging affluent whose predecessors turned to time honoured examples from the Faubourg Saint Germain, London's Mayfair or New York's 400, are turning away from a nearly 150 year tradition of  living with important and elegant furniture and decorative arts of the Ancien Régime. This tradition not only communicated a certain status and degree of education, but it was part a sincere societal effort to maintain a standard of civilized living and, as in the case of a collector like the redoubtable Mrs. Dodge and Mrs. Wrightsman, one day endow important museums with the finest examples from which the next generation of connoisseurs could learn and be enriched.

In this new changing and uncertain world, a visit to Dalva is a visit to the Mount Olympus of the world of collecting great French 18th Century furniture. Is this an expensive collecting category? Yes... 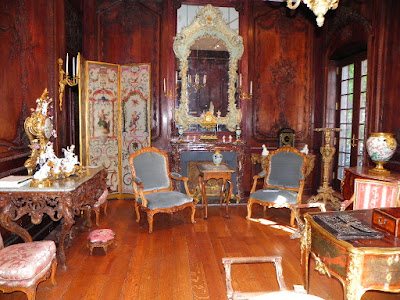 ... But then it really is not when you consider the cost of a masterpiece of 18th Century French marquetry as currently available a Dalva Brothers is modest next to what is doubtfully touted as "artisan" contemporary furniture in the current retail market and what is passing for "Contemporary Art" for seven dizzying figures at the World's international art fairs. By comparison, Dalva's offerings which are mostly in the 5 figures (with some just in the 4 figures and a few more in the 6 figures) are a sound acquisition by comparison and will probably pass the test of time better than many current crazes when all is said and done.

Posted by The Curious Connoisseur at 7:29 PM