A delightful blog entry in one of my favourite blogs discussing taste and decoration was written by much admired fellow blogger An Aesthete's Lament. I recommend the entry as I do this very amusing and enlivening blog.

Recently the blog discussed a charming mid 20th Century adaptation of an 18th Century furniture form that is usually only known to serious antiquarians today... As a serious antiquarian and particular enthusiast of the decorative arts of 18th Century Paris and Versailles, my current entry aspires to provide my welcome visitors with an antiquarian's view and history of this admittedly fetching and almost forgotten form of serving table.

Among the most delightful and civilized tables for a specific use in 18th Century France, there was the rafraichissoir. It has often also been called a servante The essential purpose of the rafraichissoir was to allow a host and his guests to dine alone unaccompanied by waiters and other domestic servants that could overhear private conversations. Bottles of wine would sit chilling in 2 (or sometimes 3) wells that were actually removable buckets inset in the top of the table. These receptacles, were usually silver plated or brass. The remaining area of the table top was usually (but not always) covered with a marble surface. And below that was a frieze drawer for extra napkins, cutlery, a corkscrew or whatever else was required. This was usually placed along the front just below the marble. A standard rafraichissoir also had one or sometimes a pair of tiered shelves below to hold covered dishes, or extra plates for later courses. Invariably, it was customary to rest the four legs of a rafraichissoir on brass casters to allow it to be wheeled about as needed. And sometimes, though not always, there were handles on the sides. In short, the rafraichissoir's main purpose was to allow the small group more privacy by providing all the required items for the duration of the dinner without the prying eyes and ears of servants - thus eliminating servant's gossip on which many a historian has relied for years!

The usual rafraichissoir that developed around 1770, was most often apparently made by the Parisian ebeniste Canabas who seems to have made a specialty of them. You see a good example of the kind of rafraichissoir his workshop produced in the illustration of the pair below.


The lovely pair of rafraichissoir illustrated here were lot 813 at an auction at Christie's in New York on 20 October 2006.

Incidentally, as early as the 1770's these very useful tables were already customarily being made of mahogany before that wood really became so very fashionable on the eve of the French Revolution. In the engraving by Moreau le Jeune, entitled Le Souper Fin, you can see the very setting and social gathering at which it would have been put to (not surprisingly) very good use.

Understandably, as the curvaceous Louis XV style gave way to the more rectilinear Louis XVI and later Directoire Styles, the rafraichissoir similarly became more rectilinear as well. In the other illustration, you will note a restrained rafraichissoir of approximatly 1785-1790 that has enjoyed the benign fate of so many of these charming tables and is now used as a planter when not enlisted to service in a dining room. Incidentally, the lovely drawing room is in the Chateau de Chesnaie as illustrated in Meubles et Ensembles Époque Louis XVI by Yvonne Brunhammer and Monique de Fayet published in Paris by Éditions Charles Massin in 1965. 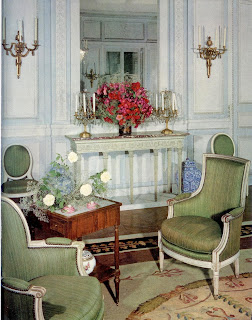 Posted by The Curious Connoisseur at 12:54 PM