From all accounts Madame Du Barry had everything it took to become a siren and sex symbol of the same level as Liz Taylor. Even people predisposed to disapprove of her on the basis of her early career as a deluxe call girl and later as the last official mistress to the aging Louis XV during his twilight years, had to admit, after meeting her and enjoying a conversation, that she was charming, likable, egalitarian in her good manners and kindness. Blond bombshell that she was... She was no fool. It certainly didn't hurt that she was stunning. Had she lived today, with her natural physical beauty, her easy manner, and her geisha-like desire to make the person with whom she was speaking at a given moment feel like the centre of her universe, she'd still be a celebrity. No question! 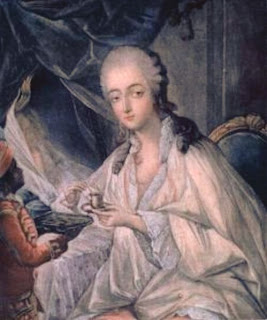 Of course, the apogee of her "career" started in 1769 when she was introduced to Louis XV, seen below in the portrait by Drouais, by one of her "clients" the aging rakish and utterly mesmerizing (if no less utterly cynical) Duc de Richelieu. Richelieu was one of the king's closest friends. What even Richelieu did not expect, as did no one else, was that Louis XV liked her so much in bed he broke all traditions and court customs and installed her at court in her own apartments and shortly after that arranged to bend the rules and made her is official mistress. 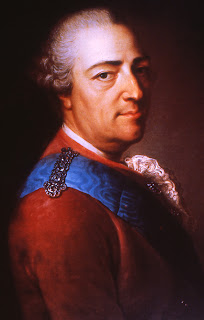 This was unimaginable! Not that the king would have an official mistress... That was expected. What totally nonplussed even the most worldly courtier what that the position was not filled by a married woman born into a higher rank in society - and customarily from the court itself. At the same time, to quell criticism a bit, and to cover his bases, Louis XV arranged for her to marry the country bumpkin elder brother of her utterly handsome well born and rather ambitious pimp who happened to be a minor noble too poor to live at court and who was living in the provinces in a crumbling chateau. The groom was the Comte Du Barry. A Count! How convenient! Instant pedigree by marriage! He immediately came to court at Royal command solely for the wedding. He was promptly sent back home to the provinces and never saw the bride again. Mission accomplished. One of the Paris's most celebrated and expensive prostitutes was now the king's favourite and was to go by the name of La Comtesse Du Barry! 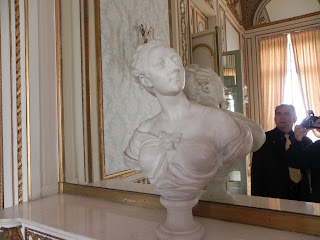 With the position came the perks. And a little real estate was one of the most important rewards for any official mistress of the king of France. A mistress of the king could enjoy the use of such a gift during her entire lifetime - even if the king should predecease her. Not a bad fringe benefit!

In truth, the only large country house she was given was a modest - if charming chateau I recently spotted at the village of Louveciennes just a 15 minute drive from Versailles. It is seen below. 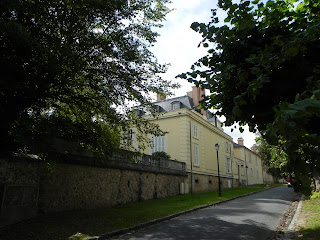 The main chateau is not the reason to visit. Though old monochrome photos suggest it's lovely inside with finely carved boiseries... However, it's now apparently privately owned and not easily accessible. The reason to visit is to see the one addition of a separate pavilion for entertaining that Madame Du Barry commissioned in the early 1770's from one of the most avant garde and sophisticated architects of the day, Claude Nicholas Ledoux. Ledoux's Palladian influenced classical style is still appealing to modernists and has a very clean contemporary demeanor that is still reverently rooted in Classical traditions. He was hugely admired by Thomas Jefferson. This is his portrait displayed at the Pavillon de Musique today... 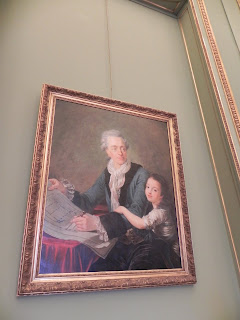 At the Pavillion de Louveciennes he created one of the most fetching folies imaginable for entertaining. 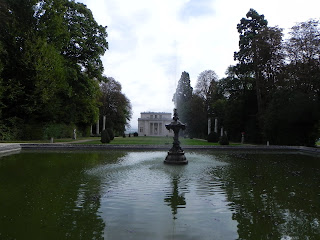 I was charmed approaching the entrance vestibule, as must have been 18th Century guests of Madame Du Barry, as I made my long overdue visit for the first time... 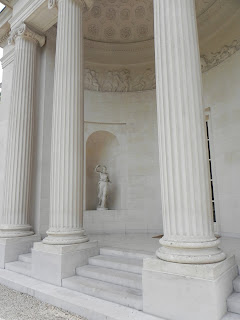 Below is the lesser seen rear facade of the Pavillon de Musique de Madame Du Barry... 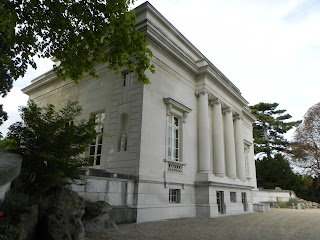 Alas! The house as seen today has been relocated a few meters, has had an additional attic story added in the 1920's by a prior owner and understandably attracts the derision of purists who say it's not worth even visiting. I disagree. Granted, it's suffered alterations. But enough is there to get a feeling for how the house seemed in the 1770's when Madame Du Barry entertained Louis XV there one evening in the large central vestibule hall also known as the Salle de Musique. One thing is certain. This was the retreat of a very well kept woman... And happily for us, she had unfailing good taste! 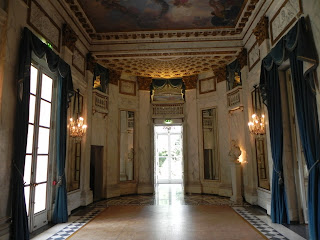 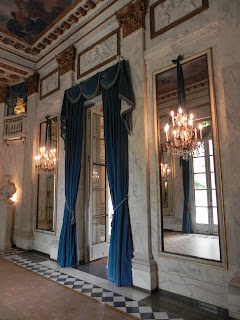 The dinner Madame Du Barry held for Louis XV was happily recorded in this lovely watercolour by Moreau le Jeune and seen below. The same room is very recognizable. 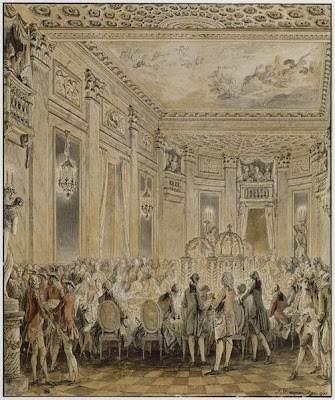 Another unforgettable detail still in place is the collection of utterly jewel-like and finely chased ormolu door and window hardware. Such details, along with the furniture which was once there and which was long ago dispersed into museums and private collections, were noted in the memoirs of one special visitor, the portrait painter Madame Vigée Lebrun. 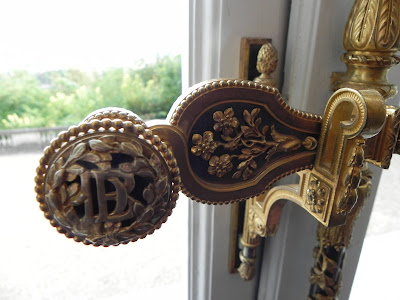 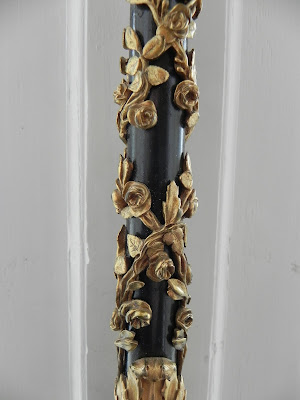 Among the items once adorning the Pavillon de Musique was a pair of seductive torchères by Pajou which are now displayed in New York's Metropolitan Museum of Art. This is one of them... 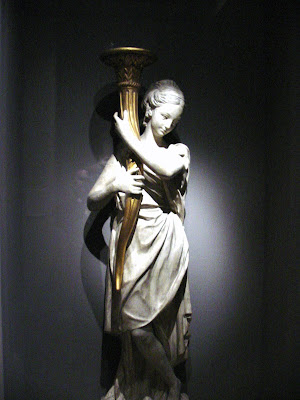 And of course, it was for this ravishing folie that Fragonard had originally created his series of canvases on "The Pursuit of Love" which Madame Du Barry rejected in favour of inferior but appropriately more vigorously Neoclassical paintings by Vien. Admittedly, the Vien paintings series is not as sublime as the Fragonard series. But the paintings she decided to install here were very `a la mode for the time and more in keeping with the classical mood of the decorative ensembles.
Two examples of the paintings she opted to mount on the walls of the pavilion are seen below. They are currently in the Louvre in Paris. 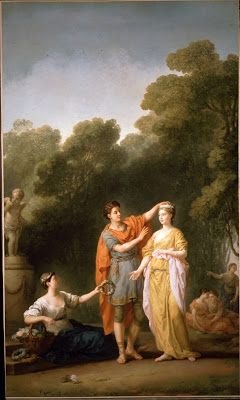 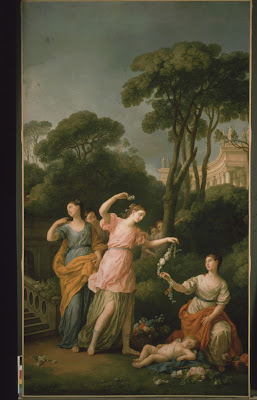 The paintings were originally mounted on the walls of what was oddly termed the "Salle de Cul".  Below is a view of how that room appears today. It is just off the Salle du Roi which is the central drawing room. 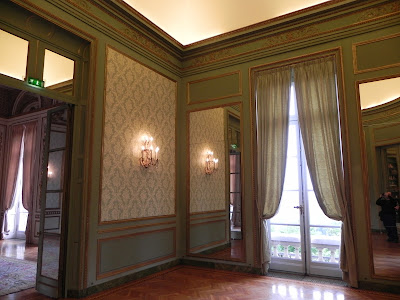 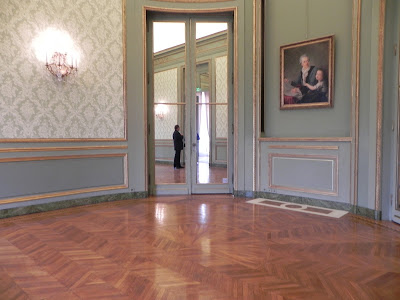 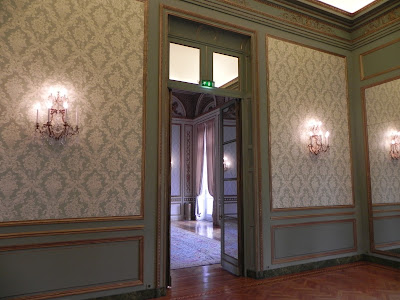 Ironically, copies of the Fragonard paintings (of which the originals are now in New York's Frick Collection) have been placed in the dining room at the pavilion where they are currently on view. It's also interesting to note that, though the canvases were originally commissioned for this building, they would have not been placed in this room which is on the opposite side of the Salle du Roi. As just noted these were intended to be installed in the room we've just visited above. 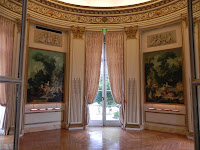 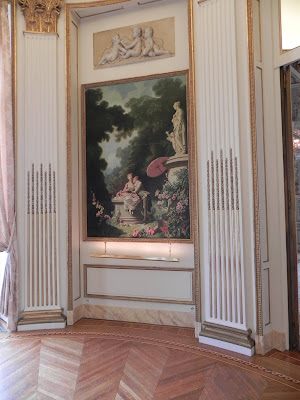 Other adjacent rooms, though unfurnished, are still lovely to behold! This is the central Salle du Roi to which I alluded earlier. 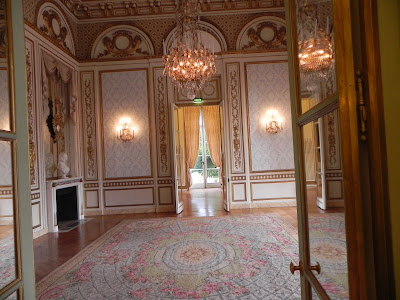 It is in the centre just off the large Salle de Musique where Madame Du Barry entertained Louis XV and other guests as seen in the Moreau le Jeune drawing we saw above. The Salle de Musique is discernible from here through the doors. 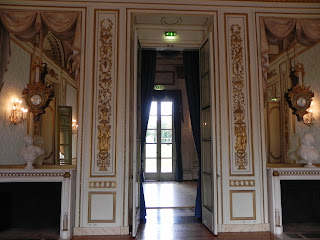 Interestingly, it was in this drawing room that a recent photo shoot was done for the 2009 Dieux du Stade calender of studly French rugby players! What would Madame Du Barry have made of that? 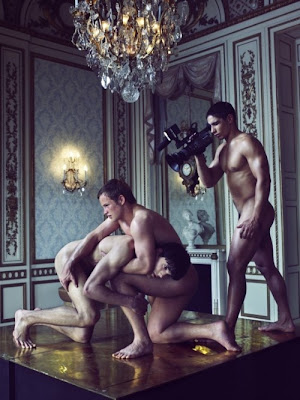 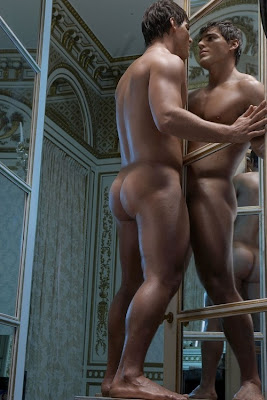 This is Madame Du Barry painted by Vigée Lebrun in 1783 after her "retirement" from court... The portrait is currently in the collection of the Corcoran Museum in Washington, D.C. 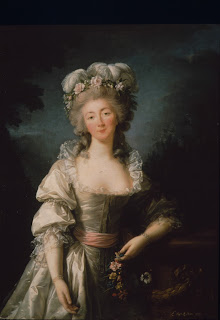 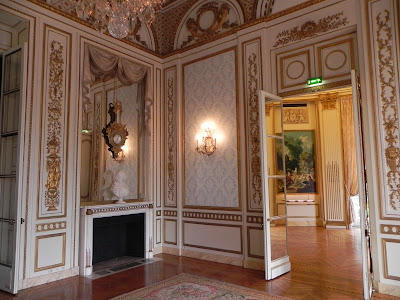 Perhaps, being the friendly gregarious lady she was, Madame Du Barry would be amused to learn that today the Pavillon de Musique de La Comtesse Du Barry is owned and operated by the Fondation Julienne Dumeste. It is available for rental for weddings, conventions and other special events and can also be visited by appointment. 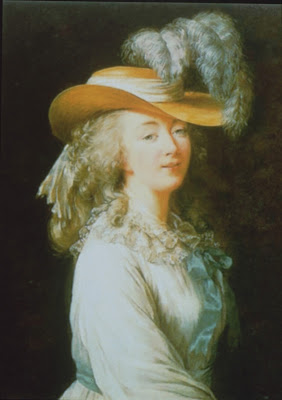 Posted by The Curious Connoisseur at 4:17 PM