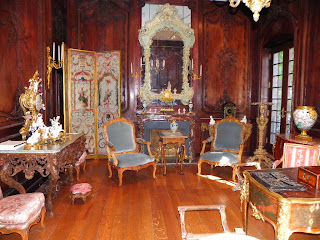 Any serious collector or connoisseur of 18th Century French furniture has made the mandatory pilgrimage to the legendary family owned antiquaire, Dalva Brothers in New York City. Situated after a recent relocation in a historic town house at 53 East 77th Street, this gallery of Olympian category has various floors of boiserie paneled rooms offering a dazzling selection of cabinet work as well as the art of menuiserie on which we shall focus in this visit. Menuiserie was the art of the wood carver who specialized in chairs and other seating, console table and frames of various sorts. The strict guild regulations clearly separated the menuiseur from the ebeniste who specialized in case furniture that was veneered. During my recent visit with Mr. Leon Dalva, the current owner, I was given the customary cordial greeting by this gentleman whose erudition is matched by his affability and delight in sharing his enthusiasm with collectors and historians of the period whose seriousness is evident. I had the pleasure of first meeting this exceptional gentleman in 2007 when I directed a workshop for appraisers in NYC about French 18th Century furniture and on which I collaborated with the world recognized expert in the field, Mr Thierry Millerand. Thierry kindly arranged an excursion to Dalva Brothers to be a perfect ending to this two-day workshop which allowed the participants a chance to view this exceptional museum quality collection in the company of these 2 widely acknowledged authorities. It was quite a thrill! And for me it was a most gratifying introduction to Leon Dalva and his lovely wife Nancy who was also present. During a more recent visit, I discussed several of the gallery inventory's chairs with Leon Dalva who balked with utter conviction at my observation about what I perceive as a waning taste for great French furniture of the Ancien Regime in the collecting and auction world of the early 21st Century. To such a suggestion he replied without a moment's hesitation, "French 18th Century furniture is alive and well here at Dalva!" When you visit, it's easy to agree with him and to question how anyone would not want to collect such glorious furniture if given the opportunity.

Leon Dalva's enthusiasm is unabashedly contagious! And no wonder... The inventory in the settings of finely carved wall panels and creaky wood floors is utterly mesmerizing in its beauty!

Take for instance this chair which is part of a suite attributed to the greatest menuiseur of the reign of Louis XVI, Georges Jacob. The set was executed on the eve of the Revolution in an assertively avant guard style anticipating the Empire under Napoleon with its reliance on Egyptian motifs. 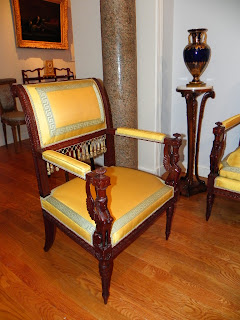 In a more familiar manner is this perfectly carved and oil gilded Louis XVI pair of fauteuils of which we see an example. Oil gilding was a less commonly used technique (as opposed to the more common technique of water gilding) and surviving examples of chairs with the original oil gilding are very rare. 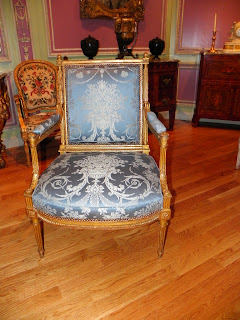 Below is a fine example of the late Louis XVI's period penchant for "Anglomanie" in certain court and aristocratic circles with favoured the use of mahogany in both cabinet work and seating. This particular armchair was clearly designed for an officer to whom it was important to be able to seat himself comfortably while wearing his understandably cumbersome sword! Note the exaggerated inward curvature of the support on the arm and you can see how the client often worked with the artisan to ensure a successful design that was also accommodating the patron's needs while resulting in what had to be the most harmonious period of successful collaboration between patron and artisan in Western history! 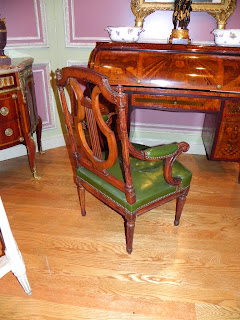 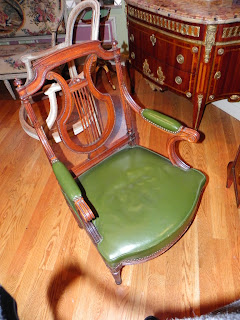 Of course Dalva Brothers has much more than just the chaste neoclassicism of the Louis XVI period in its vast and uniformly superb inventory. The Louis XIV period is well represented with such examples as this assertive fauteuil of the 17th Century with what appears to also be original gilded wood. 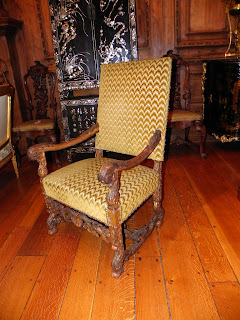 Plenty of exceptionally fine Louis XV chairs are part of the Dalva Brothers collection. Most outstanding to my mind was this pair of fauteuils of which we have an example below in which a truly rare and not often seen finesse of carving is immediately apparent with the rhythmic and twisting vines and foliage carved by the hands of an obvious virtuoso! In this instance the menuiseur was one of the period's greatest artisans L. Cresson who was well patronized in court circles. 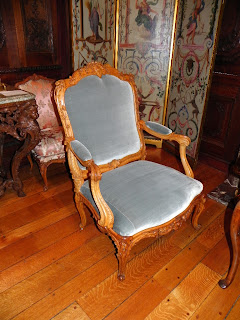 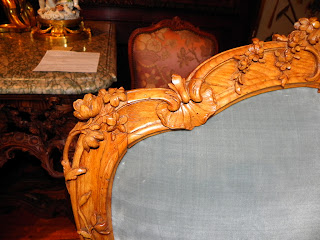 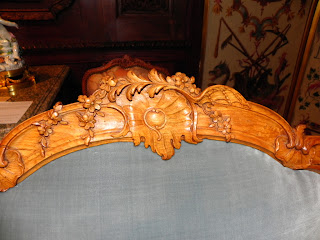 Other examples seen below are ample testimony, in visual and tactile terms, to Talleyrand's often cited remark that only those fortunate enough to have enjoyed the world of elite Parisian and court society before 1789, could understand how sweet life could be for that enviable and enticing ruling caste! 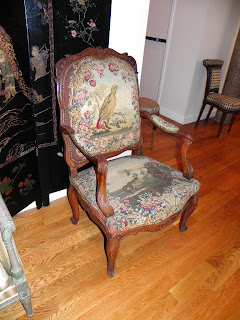 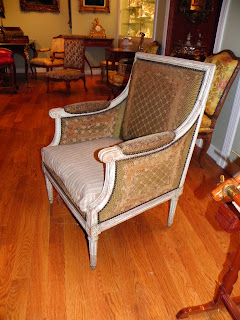 Posted by The Curious Connoisseur at 12:29 PM